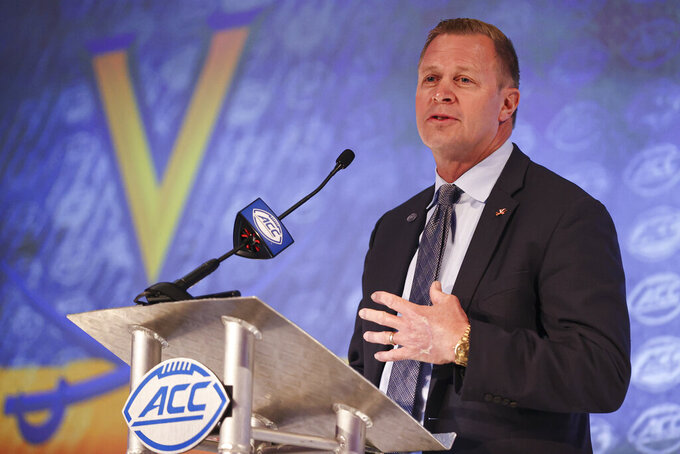 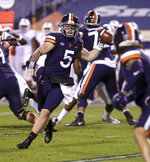 The Cavaliers, who had won four straight before the 33-15 loss to Virginia Tech, opted not to participate in the postseason. They head into their season-opener against William & Mary on Saturday with loads of experience, and lofty expectations.

The loss to the Hokies ended a bizarre season disrupted by the pandemic, and one in which Virginia was unable to defend its Atlantic Coast Conference Coastal Division title because divisions were scrapped for the season.

The disappointment prompted a wave of Virginia seniors to take advantage of a chance to return for an additional year of eligibility under NCAA rules, and all that experience made the preseason more about fine-tuning things.

Mendenhall is excited to have dual-threat quarterback Brennan Armstrong back, but said noted there is much more to the Cavaliers than their talented QB.

“If you think about the other players that will have significant touches or have a chance to touch the ball at the skill positions," Mendenhall said, “there are lots and lots with experience as well as in the offensive front."

But the Tribe, from the Colonial Athletic Association of the Championship Subdivision, will also bring an experienced team to Scott Stadium. They played just three games in the spring, losing two, but have virtually everyone back.

“You always worry about the execution of your team,” he said, noting that crowd noise figures to be a factor. “... And, you know, there’s going to be issues or mistakes, but it’s what you do with the next play. After that, it’s how you respond and how you rebound from things that are going to happen.”

Some other things to watch when William & Mary plays at Virginia:

Armstrong finished as the Cavaliers' top rusher last season with 552 yards in nine games, and Mendenhall hopes that changes this season. Wayne Taulapapa is back, followed closely on the depth chart by Mike Hollins, who opted out of last season because the pandemic concerns. Mendenhall said Ronnie Walker Jr. and graduate transfer Devin Darrington also impressed in fall camp.

Tribe dual-threat quarterback Hollis Mathis could begin his third season as the starter for the Tribe, but London said that will be a game-time decision. Mathis is coming off shoulder surgery, and his coach said while Mathis will be raring to go, he’d rather not force things and risk losing him again.

Four of Armstrong's top five targets last year are gone, with receiving leader Billy Kemp IV (67 catches, 644 yards, 1 TD) the only returnee. But the team has raved about Jelani Woods, a tight end transfer from Oklahoma State, as both a blocker and receiver, and Ra'Shaun Henry, who averaged 29.4 yards on just seven receptions last season, four of them going for touchdowns.

The Cavaliers typically played with just 250 people in attendance last season because of pandemic restrictions, and those limitations have been lifted. The spread of the Delta variant has raised concerns, though, and Mendenhall said he's not sure how much engagement he'll allow players to have with their families and fans.

“I don’t think any of us know how normal it will be,” Mendenhall said.