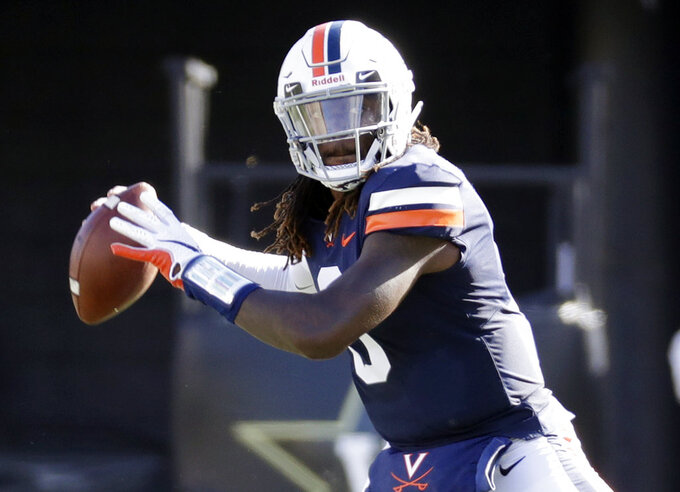 Virginia is stepping out conference play this weekend when the Cavaliers host Liberty.

It's a scheduling oddity for Virginia, which is in contention for the ACC's Coastal Division title and the Cavaliers say they will not look past the Flames on Saturday.

"Just the next-week mentality," linebacker and tri-captain Chris Peace said of digesting a loss to Pittsburgh and moving forward. "After the NC State loss, I was just like, 'OK, it happened. You're never going to get it back. Just focus on the next week. That's all you can do.' And I pointed out, we're not too ahead from last year. We're 6-3, just like we were last year at one point. Now, however, we want to finish."

The Cavaliers (6-3) and Liberty (4-4) have never met on the football field, but Virginia coach Bronco Mendenhall said his team has plenty to work on both sides of the ball with the Flames bringing an explosive offense to Scott Stadium.

"What stands out is production," he said. "Liberty is ninth nationally in throwing the football, I think 26th in scoring offense, and so the statistics jump out. Not hard to see on film that they have some talented players, a nice scheme design and are very clear about what their identity is and the speed in which they want to do it."

Virginia, meanwhile, got away from what it wants to do in a 23-13 loss to Pittsburgh. The Panthers contained Bryce Perkins and sacked him five times, which highlighted the need to be less reliant on the quarterback.

"Our run game can't just be Bryce on zone read pull and then quarterback scramble," Mendenhall said of Perkins, the team's No. 2 rusher. "That can't be the majority of the yards. That can be complementary, but it has to come off of run game execution off our core plays. Right now it's shifting in reverse order."

"He starts it off," Gill said of Perkins. "Very, very talented dual threat guy. ... He makes a lot of things happen with his legs as he's making throws and also, he can just take off running. He breaks a lot of tackles."

Last week, they allowed 777 yards in a 62-59 triple-overtime loss to Massachusetts.

Here are some other things to watch when Liberty visits Virginia:

Perkins' running ability is supposed to open things up for tailback Jordan Ellis, wide receiver Olamide Zaccheaus and others, but none of that happened against Pitt. Ellis carried just 10 times (for 46 yards) and the fleet-footed Zaccheaus, the school's career receptions leader, touched the ball only five times all game.

Mendenhall said this week that the rare late non-conference game can present a challenge, and Virginia has seemingly overcome the focus issues that have affected recent teams. Doing it again against the Flames, and preparing to close the season on the road at Georgia Tech and Virginia Tech, will show further growth.

Junior quarterback Stephen Calvert has 62 career touchdown passes, three shy of breaking Robby Justino's career record at the school. He's also one of just three FBS juniors with over 7,000 passing yards and 60 TD throws and has 46 completions for 20 yards or more this season, including 20 to Antonio Gandy-Golden (51 catches, 9 TDs).

Both programs have defensive players who specialize in getting to the quarterback. Virginia linebacker Chris Peace has six sacks this season, and Liberty DE Jessie Lemonier has nine, including six in the last two games.

Mendenhall hopes the surge in fan support Virginia has seen this season continues.

"I would love to have a great outing at home to finish this season," he said. "Very appreciative of our fans, and a noticeably different feeling in Scott Stadium this year to me in terms of the energy, the support, the student section. There is a noticeable difference. For me to notice it on the sideline is pretty significant."

Virginia will honor 27 fourth-, fifth- and sixth year players in Senior Day ceremonies prior to the game.

By Ralph D. Russo 19 minutes ago
By Pat Graham 2 hrs ago
By Tanner Marlar 8 hrs ago
By Steve Reed 9 hrs ago
By Michael Marot 10 hrs ago