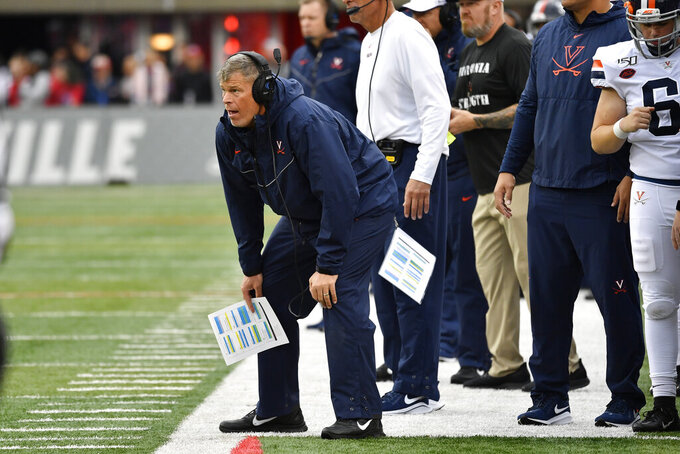 CHARLOTTESVILLE, Va. (AP) — Virginia is well-represented among the national leaders in numerous defensive categories with some impressive statistics.

Coach Bronco Mendenhall believes they need to do better.

Statistically, Virginia ranks fourth nationally with an average of four sacks per game, fifth with 87 tackles for a loss, 11th with an average a 4.88 defensive three-and-outs and is among the leaders in several other categories.

Virginia's three losses have come in its last four games, and all on the road. In two of the games — Notre Dame and Louisville — the Cavaliers led at halftime before fading in the second half. In all three games, adding a 17-9 loss at Miami to the mix, they lost the turnover battle by a combined 8-1.

"In each of those games, there has been a successful drive by our opponent," Mendenhall said, speaking of late-in-the-game situations. "So as strong as we are statistically, there is one more drive that we need to get stopped per game for us to win the Coastal."

It would also help if they stop stopping themselves by ending their own drives prematurely.

Quarterback Bryce Perkins accounted for all five of Virginia's turnovers in the 35-20 loss at Notre Dame with two interceptions and three fumbles, including one that was returned 23 yards for a touchdown. Another was returned 48 yards to set up a 7-yard touchdown drive.

"We're turning it over at too high a level in our losses and not taking it away at a high enough level," Mendenhall said.

Perkins also threw an interception in the 28-21 loss at Louisville and has nine touchdowns and eight interceptions on the season. Virginia is lacking a dominant running game this season, the offensive line has struggled with protection at times and teams are more in tune with what Perkins can do with his feet. The QB said his tendency to try to do too much at times "definitely showed up" when reviewing film of the losses.

"I've got to do a better job of just being smarter about not trying to always be superman and make the superman plays," he said.

Perkins' three fumbles against the Fighting Irish all came on sacks, and after he tweaked a preseason knee injury against Louisville, the coaching staff backed off on calling running plays for him. Still, he and Mendenhall agreed, there were times he abandoned the pocket before giving the called play a chance.

"Just watching it, there's definitely sometimes where I escape early," he said, perhaps because he feared getting his knee injured further.

The Cavaliers spent much of their fall camp preparing for their season opener on a road at Pittsburgh, a team they lost to in each of Mendenhall's first three seasons as coach. The losses away from home since have left them looking for ways to get back to the mindset they had in their 30-14 victory at Pittsburgh .

"We know we've got to take one more step you know, as far as everything: the focus, the execution, the soundness of our team," Perkins said.

Linebacker Noah Taylor said that work started once the Louisville game was over.

"We knew that we'd lost because of our own mistakes and our missed assignments," he said. "But after the game we were worried about UNC and worried about what we can do next week, because we still have a season ahead of us. It's not like it's the end-all, be-all."