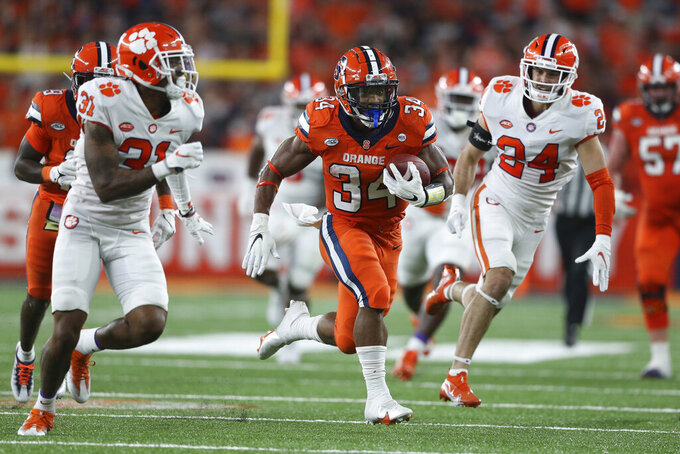 Virginia Tech coach Justin Fuente sounds envious when he talks about the challenge his struggling Hokies will face on Saturday against Syracuse.

“This is a team that’s found their identity,” Fuente said of the Orange (3-4, 0-3 Atlantic Coast Conference). “... They have really found, in my estimation, ... a quarterback, and certainly found their tailback."

Those are things the Hokies (3-3, 1-1) can't say. After taking No. 13 Notre Dame to the wire before losing 32-29 at home, Virginia Tech floundered offensively last weekend in a 28-7 Coastal Division loss to No. 23 Pittsburgh. Quarterback Braxton Burmeister was 11 for 32 for 134 yards vs. Pitt and the running game totaled 90 yards on 28 carries, 3.2 yards per attempt.

The Orange enter the game trending in the opposite direction.

Syracuse has the nation's second-most productive running back in Sean Tucker, who averages 135.4 yards and has scored 11 touchdowns. Only nine of those came rushing; he also leads Syracuse with 224 yards on 14 catches and two more TDs. His five straight 100-yard games match the program record, not bad for a school that's featured the Hall of Fame trio of Jim Brown, 1962 Heisman Trophy winner Ernie Davis, and Floyd Little.

“Sean is different. He’s something that doesn’t come along very often,” Orange coach Dino Babers said. “We need to use that, and that’s what we’re doing.”

The Orange also appear to have settled on a quarterback in Mississippi State transfer Garrett Shrader, who has started the past four games, leading to the exit this week of two-year starter Tommy DeVito to the transfer portal.

Shrader’s running ability has helped jump-start the Orange offense. The 6-foot-4, 230-pound Shrader totaled 315 rushing yards and four TDs in last-play losses to Florida State and then-No. 19 Wake Forest, but was held to just six yards on seven carries in a 17-14 loss at home last Friday night to Clemson.

Some other things to watch when Syracuse visits Virginia Tech:

Fuente arrived in Blacksburg with a reputation as an offense-minded coach, but things have not panned out this year behind quarter Braxton Burmeister and the absence of an effective running back. Burmeister leads the team in rushing with 212 yards and is completing less than 54% of his passes.

Against Pitt, “Ultimately the execution left plenty to be desired,” Fuente said.

Syracuse has lost all three of its ACC games, the first two on the last play and last week 17-14 in the final minute against Clemson when place-kicker Andre Szmyt missed a 48-yard field goal attempt that would have tied it at 17-all.

"We’re getting tired the way that we’re losing,” redshirt senior defensive lineman Josh Black said. “We’re one play away these last three games. That’s what makes it so frustrating to us. It almost seems like it’s rigged.”

After playing six of their first seven games at home, the Hokies will play away from Blacksburg on four of their next five weekends. Their stops include Georgia Tech and longtime rivals Boston College, Miami and Virginia.

DON'T I KNOW YOU?

These long-time Big East rivals have met just twice as members of the ACC, the last time in 2016, a 31-17 Orange victory. Syracuse leads the all-time series 10-8. The losses include a 62-0 beatdown for the 16th-ranked Orange in 1999, the year the fourth-ranked Hokies played for the national championship.

In that game, Michael Vick threw for just 135 yards and a touchdown, but “Beamerball” scored twice on fumble returns and once on an interception.

The Metallica song has given the Hokies one of the best entrances in college football, but struggles on the field have led to boos raining down on Fuente. He says it's part of coaching and hopes his players can ignore it, but after meeting with Baylor last offseason, only positive results will call off the dogs.