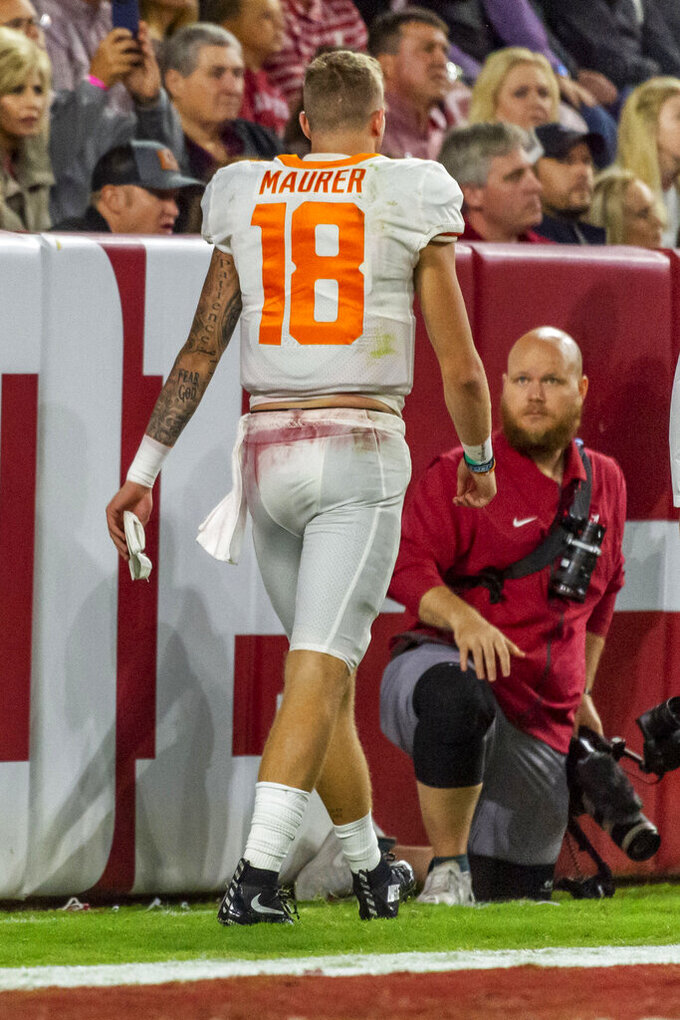 Tennessee quarterback Brian Maurer (18) walks off the field after being hurt during the first half of an NCAA college football game, Saturday, Oct. 19, 2019, in Tuscaloosa, Ala. (AP Photo/Vasha Hunt)

KNOXVILLE, Tenn. (AP) — Tennessee coach Jeremy Pruitt is mum on the status of Brian Maurer for Saturday's game with South Carolina after the freshman quarterback sustained concussions in back-to-back weeks.

Pruitt is saying even less about which quarterback could start the game if Maurer can't play.

Pruitt said at his Monday news conference he should know "in the next couple of days" about Maurer's availability for the South Carolina game. Pruitt said he suspected that Maurer wouldn't practice Monday.

"I trust our medical staff," Pruitt said. "They're the ones that make the decisions on things like that. I meet with players — all of our players — lots throughout the week, but it's never about any kind of medical conditions.

Late in the first quarter of a 35-13 loss Saturday at No. 1 Alabama, Maurer was hit by Shane Lee just after throwing a pass, and the back of the quarterback's head hit the back of offensive tackle Darnell Wright's right leg. Pruitt said after the game that Maurer ended up with a concussion.

Maurer was replaced by Jarrett Guarantano, who got pulled from the game midway through the fourth quarter after making a crucial fumble that resulted in Alabama's game-clinching touchdown. Tennessee's only other scholarship quarterback is redshirt freshman J.T. Shrout.

"We'll see how the week goes," Pruitt said about who would start if Maurer's sidelined.

Pruitt was asked if the coaches still trust Guarantano as much as they did at the start of the season. Guarantano has made 22 career starts for Tennessee (2-5, 1-3 SEC) but got benched after struggling throughout September.

"Coaches have to earn players' trust and players have to earn coaches' trust," Pruitt said. "It goes hand in hand. Jarrett's a guy — I've said many times before — that I believe in. I think he has what it takes. But I do think he needs to be more consistent with the right intangibles to play at a higher level."

Running back Rico Dowdle has undergone an MRI after hurting his knee Saturday in a 38-27 loss to No. 7 Florida. South Carolina coach Will Muschamp had no update on the MRI during his Sunday conference call.

Tennessee's offense has gotten a boost since Maurer took over as the main quarterback, but the freshman has been unable to finish each of his three starts.

Maurer left a 43-14 loss to No. 10 Georgia after getting sacked with less than five minutes left in the game. After he dove and landed head-first during a second-quarter scramble in a 20-10 victory over Mississippi State, Maurer stayed in the game for the remainder of that series but didn't play the rest of the day.

Guarantano has replaced Maurer in each instance. The fourth-year junior went 7 of 16 for 55 yards against Alabama and made a critical mistake that ended Tennessee's upset hopes.

Tennessee trailed 28-13 and faced fourth-and-goal from inches away midway through the fourth quarter when Guarantano attempted to dive across the goal line. Guarantano found no running room and fumbled into the end zone, enabling Alabama's Trevon Diggs to pick up the ball and race 100 yards for a touchdown.

Shrout played quarterback for Tennessee the rest of the way.

Television cameras showed Pruitt yelling and pointing a finger at Guarantano and tugging on the quarterback's face mask after the fumble. Tennessee's blocking on that play suggested the Vols had planned to hand off rather than sneak on the fourth-down attempt.

After the game, Pruitt blamed himself for "some miscommunication" leading to that fumble and said Guarantano should have tried to push through the line rather than attempting to leap over the top.

"It's pretty obvious what happened," Pruitt said Monday. "It's over with, and we've moved on. (There are) lots of mistakes that were made in that game. I made more than anybody on our sideline. We've got to do a better job as coaches and players, where we don't make mistakes."