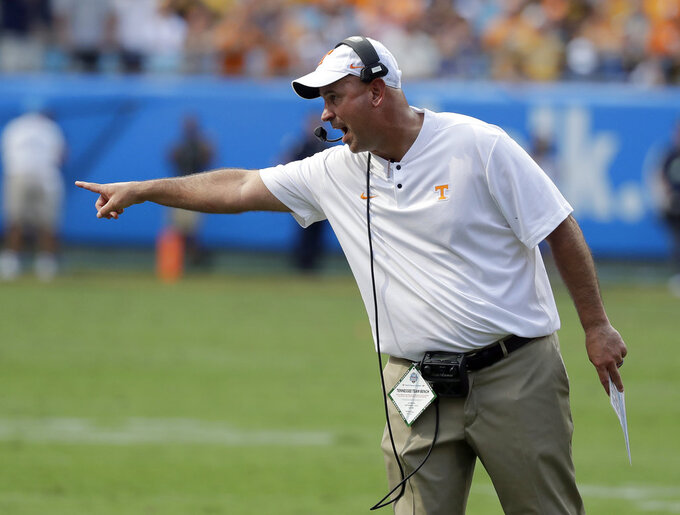 KNOXVILLE, Tenn. (AP) — Tennessee's humbling loss in Jeremy Pruitt's debut offered lessons for everyone, including the coach himself.
The Volunteers are hoping for long-term benefits from what they learned Saturday in a 40-14 thumping against No. 14 West Virginia.
Tennessee has a couple of games to work on getting better before opening Southeastern Conference play Sept. 22 against Florida (1-0). The Vols will be heavily favored the next two weeks against Football Championship Subdivision program East Tennessee State and UTEP.
"I think there are lots of ways our football team can improve," Pruitt said. "When you watch film from the past week, we made a lot of mistakes. There were a lot of unforced errors. We can't beat ourselves. You have to make the other team beat you."
Pruitt included himself in that criticism, citing a clock management issue that enabled West Virginia to have enough time to kick a field goal and extend its lead to 13-7 on the final play of the first half. West Virginia began that drive after Tennessee punted with about nine seconds left on the play clock.
"We punted the football when we had fourth-and-4 with a minute and 58 seconds left," Pruitt said. "I should have let the clock run (down more). I thought that was a critical mistake."
Tennessee stayed competitive throughout the first half, thanks to Tennessee's fourth-and-goal conversion from the 1 in the second quarter. Pruitt's decision to forgo the field-goal attempt earned praise on message boards and social media from a fan base that often criticized the previous coaching staff's red-zone decisions in big games.
Even so, Pruitt saw plenty of areas in which he needs to get better.
"There are lots of lessons I can take from this game," the former Alabama defensive coordinator said. "I'm a defensive-minded guy, so when you're sitting there watching the offense, I need to know exactly what I can do to help give probably some influence to the offense. I need to do a better job of that in the game."
Facing lesser opponents the next two weeks could help build the confidence of a Tennessee program that has dropped eight of its last nine games, dating back to last season. It also should enable the Vols' younger players to tune up before the start of SEC competition.
One underclassman poised for a bigger role is sophomore Tim Jordan, who replaced an injured Ty Chandler last week and rushed for 118 yards on 20 carries. Pruitt said Monday that Chandler's status is day to day after the sophomore got his "bell rung" against West Virginia.
Jordan described his performance as merely "OK," but offensive tackle Trey Smith was effusive in his praise.
"One guy's not going to tackle Tim," Smith said. "It's going to take at least two, and that's if you're lucky."
The next two games also could give Tennessee's young secondary time to develop.
Tennessee started two freshmen — Alontae Taylor and Trevon Flowers — in the defensive backfield against West Virginia. Bryce Thompson was a third freshman defensive back who played last week.
That secondary gave up five touchdown passes against West Virginia's Will Grier, the Associated Press preseason All-America quarterback. Junior cornerback Baylen Buchanan said the entire secondary "didn't play to our standard."
Buchanan said the secondary made too many mental mistakes and must improve its communication. He believes the Vols can learn from the experience of facing such a high-powered passing attack in the opening week of the season.
"We're not going to get discouraged," Buchanan said. "We're not going to hang our heads. Nobody's walking around here feeling sorry for themselves. We know that we made a lot of mistakes. That's just something that we have to get corrected. We have a long season. Everybody's still hungry."
NOTE: Running back Trey Coleman has left Tennessee's program. The sophomore from West Monroe, Louisiana, had four carries for nine yards last year. He didn't play in the West Virginia game.
___
More AP college football: https://apnews.com/tag/Collegefootball and https://twitter.com/AP_Top25
___
Follow Steve Megargee at https://twitter.com/stevemegargee