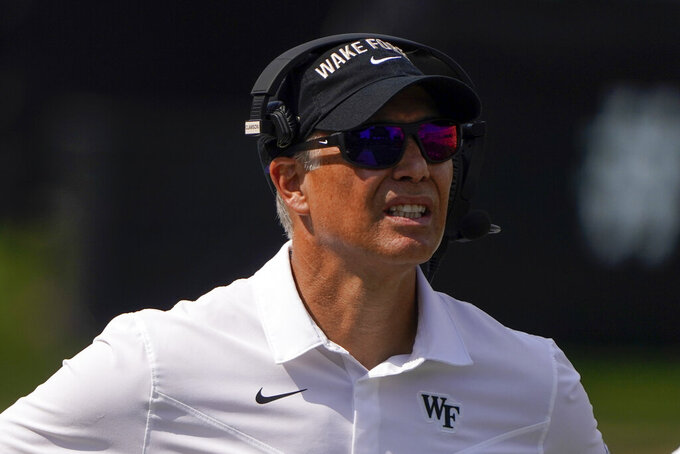 Coach Dave Clawson had talked earlier this week about wanting to see better offensive execution after an “uneven” performance in the season-opening win against Old Dominion. He largely got what he was looking for Saturday, as the Demon Deacons ran for 161 yards and had 413 total yards while dipping into their depth chart against the Championship Subdivision opponent.

“When you play these games and you have a physical advantage, you want to be efficient and you want to make explosive plays,” Clawson said. “It's really hard to find any fault with what we did on offense other than when you put the 2s and the 3s in, you don't want it to drop off as much as it did.”

Jaquarii Roberson had four catches for 97 yards for the Demon Deacons (2-0), including when he ran past the defense for Hartman's deep ball for a 64-yard score on the first play of the second half. That marked his sixth straight game with a touchdown reception.

Christian Beal-Smith carried it nine times for 60 yards and ran for a first-half score along with Hartman and Turner — a Michigan transfer who reached the end zone for the first time with Wake Forest.

“We came out and did what we wanted to do,” Hartman said. “We ran the plays and executed. It was a pretty routine offensive affair. We didn't really try to pull out a lot of bells and whistles and try to run our offense. I think we we executed. From Week 1 to Week 2, I think it was a good say.”

Juwan Carter was 19-of-31 passing for 195 yards and two touchdowns for Norfolk State (0-2). Rayquan Smith and Anthony Williams each made one catch — both for touchdowns.

Norfolk State scored its second-most points against an FBS team — in its first game against an Atlantic Coast Conference opponent. The Mid-Eastern Athletic Conference program is 0-15 against Bowl Subdivision teams.

Norfolk State: The Spartans didn’t play last season amid the COVID-19 pandemic and have gotten off to a rough start against a pair of FBS opponents, losing 49-10 at Toledo followed by this one. But new coach Dawson Odums cautioned this week that the rust from that lengthy layoff would be more evident against these higher-subdivision opponents than it would against the rest of the schedule.

“I think he got better from Game 1 to Game 2,” Odums said of his quarterback. “I think he took some major steps. That's what our challenge was to our team. ‘Let’s just keep getting better.’”

Wake Forest: The Demon Deacons have started with two lopsided wins against teams that didn’t play last season due to the pandemic, the first being last week’s 42-10 win against Old Dominion. Wake Forest has now won 16 straight games against FCS opponents dating to 2000 and turns its attention to ACC play.

“We are where we need to be," Clawson said. “When the schedule comes out, I think you look at it and say, ‘Hey you’ve got to get those first two.’ And now the rest of the way, it's going to be a heavyweight fight every single week.”

That had been a particular concern for Odums earlier this week. Weber had two punts blocked last week, and both were returned for touchdowns.

Wake Forest's Nick Sciba has made 14 straight field goals, kicking a 46-yarder in the first half and a 22-yarder in the third quarter.

Wake Forest: The Demon Deacons host Florida State next Saturday in their league opener. The teams were scheduled to meet last December in a game that was canceled due to COVID-19 concerns on the Seminoles’ roster.