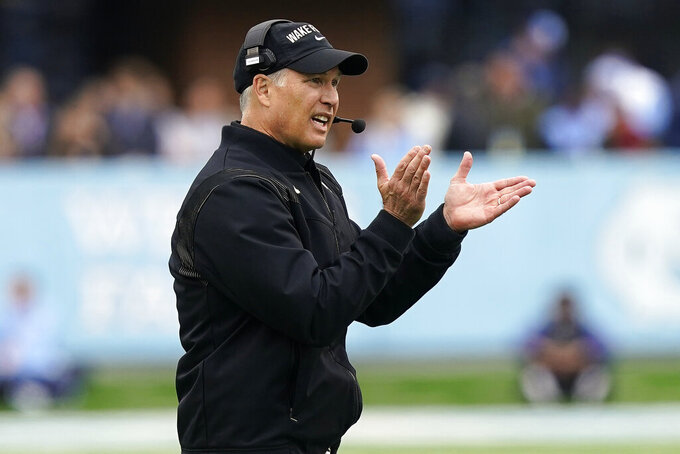 FILE - Wake Forest head coach Dave Clawson reacts during the first half of an NCAA college football game against North Carolina in Chapel Hill, N.C., Saturday, Nov. 6, 2021. For the first time since the College Football Playoff was introduced in 2014, the ACC will not be part of the four-team elimination format. (AP Photo/Gerry Broome, File)

GREENSBORO, N.C. (AP) — The Atlantic Coast Conference has named Wake Forest's Dave Clawson as its coach of the year and Pittsburgh quarterback Kenny Pickett as its player of the year.

Clawson is the ninth Wake Forest coach to win the honor and first since Jim Grobe in 2006, the last year the Demon Deacons won an ACC title.

Pickett is the second Pittsburgh player to win those two awards, following running back James Conner in 2014.

The Associated Press will release its all-ACC honors Monday.