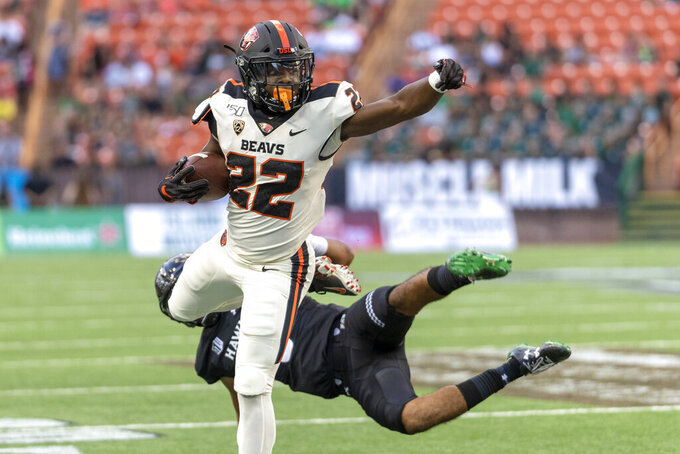 Oregon State running back Jermar Jefferson (22) looks for the end zone after hurdling Hawaii defensive back Kalen Hicks (3) during the first half of an NCAA college football game, Saturday, Sept. 7, 2019, in Honolulu. (AP Photo/Eugene Tanner) 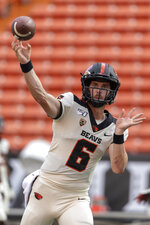 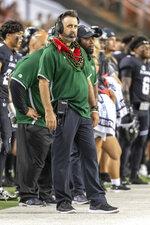 Meskell missed his first three field goal attempts from 48, 27 and 48 yards — all of them wide left — before hitting the winner.

Oregon State has lost six in a row dating to last season and have just one win since beating Southern Utah 48-25 on Sept. 8, 2018.

It was the fourth time McDonald went over 400 passing yards in a game and Ward's fourth game eclipsing 100 receiving yards. Ward tied the school record for touchdown receptions in a game.

Oregon State had a chance to tie with 1:25 left, but Jordan Choukair's 52-yard field goal missed wide left. The Beavers eventually got the ball back with four seconds left, but could only get to the Hawaii 45.

Oregon State: The Beavers saw their string of four consecutive wins over Hawaii that dated to 2006 come to an end. It is their first loss to the Rainbow Warriors since the 1999 Oahu Bowl, when head coach Jonathan Smith was the team's starting quarter. Oregon State leads the all-time series 7-4.

Hawaii: The Rainbow Warriors have now beaten two Power 5 teams in the same season for the first time since 2006, when they beat Purdue and Arizona State. They are now 32-61 all-time against current members of the Pac-12. Their last eight wins against a Power 5 team have come against a Pac-12 opponent. It is Hawaii's third straight season with a 2-0 start, which was last achieved from 1980-'82.

Oregon State: Hosts Cal Poly on Sept. 14 in the first meeting between the teams. The Beavers will play three of their next four games at home.

Hawaii: Visits No. 14 Washington on Sept. 14 in its only non-conference road game of the season. The Rainbow Warriors are 2-3 all-time against the Huskies.