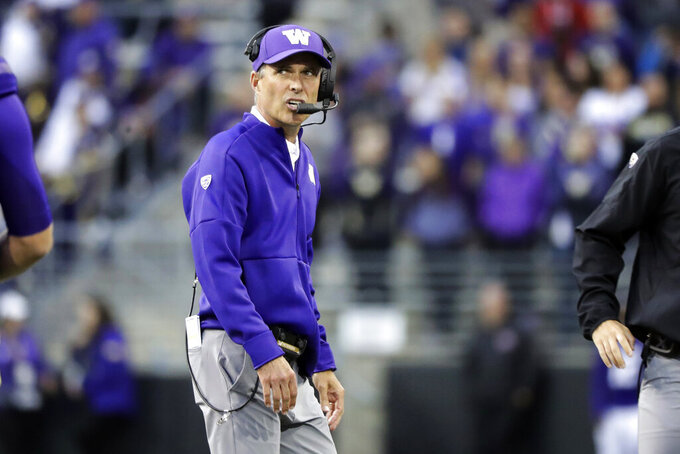 Washington hits the road for the first time this season and is seeking its first win in Provo since 1997. BYU is looking to avenge last season's lopsided loss to the Huskies and make a push for a Top 25 ranking.

BYU's defensive line vs Washington's backfield. The Cougars have been shredded by three straight opponents on the ground, giving up 225 rushing yards per game. Letting the Huskies run wild isn't a good idea. Washington will look to exploit any weakness there. The Huskies are rushing for 192 yards per game and averaged 6.1 yards per carry against Hawaii a week ago.

Washington: RB Salvon Ahmed. The junior running back burned BYU for 86 yards and a pair of touchdowns on 10 carries last season. Ahmed already has a 100-yard rushing game this season, gaining 119 yards and a TD on 21 carries against California.

BYU: WR Micah Simon. He has been the Cougars' most consistent pass-catching threat early in the season. The senior has racked up 210 yards on 13 catches so far. He totaled only 12 receptions and 107 yards a year ago.

BYU is the only FBS team to play three ranked opponents in the first four games of the 2019 season. The Cougars are one of nine teams with a win over a ranked opponent. . Washington hasn't allowed an opponent to score 35 or more points in 59 consecutive games dating to 2014. . BYU LB Kavika Fonua has averaged 10 tackles in three games with 30 of his 68 career tackles coming this season. ... Huskies WR Puka Nacua played high school football for Orem, Utah, setting set state records for career receptions (260), receiving yards (5,226) and receiving touchdowns (58). . BYU is tied for No. 8 among FBS teams with four interceptions. . Washington PK Peyton Henry is one of eight FBS kickers who have made all of their field goal attempts with six or more attempts.