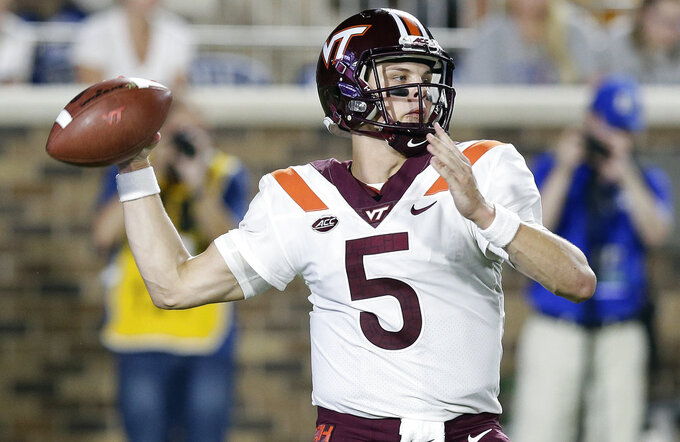 FILE - In this Sept. 29, 2018, file photo, Virginia Tech quarterback Ryan Willis (5) passes during the first half of an NCAA college football game against Duke, in Durham, N.C. The Hokies have made a change behind center, with Kansas transfer Ryan Willis stepping in last week after sophomore co-captain Josh Jackson broke a bone in his leg in a stunning loss at Old Dominion. No. 24 Virginia Tech hosts No. 6 Notre Dame on Saturday. (AP Photo/Gerry Broome, File)

The first weekend of October features three games matching ranked teams, with an unbeaten team in each game.

No. 19 Texas and No. 7 Oklahoma face off in the Big 12, No. 5 LSU is at No. 22 Florida and No. 6 Notre Dame goes to No. 24 Virginia Tech. Elsewhere, most of the playoff contenders and highly ranked teams are big favorites.

Five things to know about week six of the college football season:

The Red River Rivalry matches ranked teams for the first time since 2012. The winner could be considered the Big 12 favorite, though No. 9 West Virginia will probably have a say in that, too.

Despite Texas' recent struggles, the Longhorns have been plenty competitive against the Sooners. Last year, Baker Mayfield and the Sooners needed a fourth quarter touchdown to regain the lead, and then held on to beat the Texas, 29-24. The last four meetings have all been decided by one score.

Sooners quarterback Kyler Murray leads the No. 1 offense in the country, averaging 8.90 yards per play. The Texas defense is second in the Big 12 in allowing 4.82 yards per play and has been especially good during a four-game winning streak.

A fairly clear pecking order has already developed among Heisman Trophy contenders — or at least a top tier comprised for quarterbacks.

No. 1 Alabama's Tua Tagovailoa, No. 3 Ohio State's Dwayne Haskins and No. 9 West Virginia's Will Grier all face big underdogs this week. Murray is on that tier, too, and could surge forward by playing well in a big game.

Looking for someone off the radar who might be able to make a second-half push? North Carolina State senior Ryan Finley is averaging 328 yards passing per game and has eight touchdown passes and no interceptions. The No. 23 Wolfpack faces Boston College at home this weekend and that could set up a huge game in two weeks against No. 4 Clemson.

8.6 —Tackles for loss allowed per game by Florida, 123rd in the nation. The Seminoles visit the Hurricanes.

17 — Number of games No. 12 UCF has won in a row, tops in the nation. Also the number of consecutive games in which the Knights have score at least 30 points. SMU visits UCF.

1-10 — Notre Dame's record on the road against ranked teams since 2013. The sixth-ranked Fighting Irish face No. 24 Virginia Tech at Lane Stadium in Blacksburg.

131 — Passing attempts without an interception by LSU quarterback Joe Burrow. The fifth-ranked Tigers are at No. 22 Florida.

The first of three games that will decide the Commander-in-Chief's Trophy. While Army-Navy is always the game between the service academies, Navy-Air Force was the game that decided the trophy for years because Army was struggling.

That's not the case anymore. Air Force is off to a 1-3 start, Navy is just 2-2 and Army has been looking good. The Black Knights won the trophy last year for the first time since 1996.

The Falcons are at Army on Nov. 3 and, as usual, Army-Navy is the final game of the regular season.

The Gamecocks are home to face Drew Lock and Missouri looking to avoid a 1-3 start in Southeastern Conference play. Muschamp is not in any really danger of being fired in year three, but South Carolina had hopes of at least being the second-best team in the SEC East. Lose this game and bowl eligibility is suddenly a real question mark. And now it looks as if Muschamp will have to make do without starting quarterback Jake Bentley.