Will open seats be familiar sight in sports as virus fades? 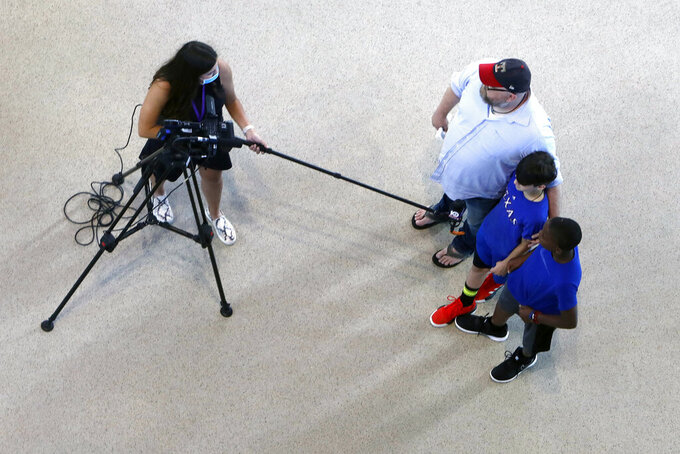 A member of the media uses a long microphone boom to interview Texas Rangers baseball fans during the first day of public tours at Globe Life Field, home of the Texas Rangers baseball team, in Arlington, Texas, Monday, June 1, 2020. The coronavirus pandemic has forced sports teams and their leagues to evaluate how they will welcome back fans. (AP Photo/LM Otero)

LAWRENCE, Kan. (AP) — Empty seats have been the norm the past few years at the University of Kansas, where a succession of football coaches has failed to turn around the flailing fortunes of the Jayhawks.

Now, all those open seats — and short lines and quiet concourses — will be the norm in stadiums just about everywhere.

The coronavirus pandemic has forced universities, leagues and franchises to evaluate how they might someday welcome back fans. While opinions vary from sport to sport, nation to nation and even state to state, one thing seems clear: Social distancing is a sure bet when fans return. So don't expect 100,000-plus fans packed into Michigan Stadium for a football game this fall or 16,300 seated inside Kansas' storied Allen Fieldhouse when college basketball season rolls around.

“We don't know how we'll be coming back,” Jayhawks athletic director Jeff Long acknowledged. “We've modeled 15 to 16,000 in Memorial Stadium, and to be honest with you, we've modeled Allen Fieldhouse, and I can't bring myself to look at it because I know how few people it will be and that's upsetting.”

Most colleges rely heavily on ticket sales, souvenirs and concessions in football and basketball to raise the bottom line to the point that non-revenue sports can be fully funded. But smaller crowds are going to be necessary to ensure proper social distancing — in pro sports around the globe, too. Forbes estimates the NFL would lose $5.5 billion in stadium revenue if all games are played without fans, and the fallout for other leagues without lucrative TV deals could be catastrophic.

The virus that causes COVID-19 is most easily spread when an infected person coughs, sneezes or talks and the droplets spread to people nearby. That's why guidelines from the Centers for Disease Control and World Health Organization preach separation in public as an effective safeguard.

In a stadium, though, creating that kind of buffer is no easy task.

Most fans tend to file through the gates at the same time, creating a bottleneck in which thousands could be in close proximity. They gather in concourses to chat or buy food, drinks and merchandise. They stand in lines at restrooms. They surge toward the exits at the end of the game.

Most teams and leagues have not publicly revealed their plans for fall sports, though some are up front about what to expect. Iowa State is looking at selling only enough tickets to fill up half of Jack Trice Stadium for football games and Notre Dame has warned of fewer fans and limits to tailgating. The Miami Dolphins released a number of ideas under consideration: using every-other turnstile, calling fans into the stadium in sections, letting them out row by row like a church service and using technology to minimize person-to-person contact.

Once fans return, partitioning off seats will become crucial. And those won't just be empty seats. Teams and leagues are investigating the use of temporary banners spread across entire sections that can then be sold for sponsorship, helping to bridge the gap caused by unsold tickets. Such banners are already used to create a more intimate settings for concerts or other events, and Bristol Motor Speedway had some of them strung up for last weekend's NASCAR race in Tennessee.

Another idea is to turn sections of 20 or more individual or bench seats into temporary suites, where a group of 10 friends and family members can be socially distant from other groups — and potentially selling them for a higher price.

“There are a lot of different things you can do,” said R.J. Orr, whose Arizona-based firm Bluemedia specializes in such “seat kills” and temporary structures. They already have worked with Arizona State and other schools on similar projects.

The next challenge is keeping fans socially distant when they do leave their seats. A company called WaitTime has software applications tied to security cameras that allow fans and stadium operators to know on monitors or apps just how busy certain areas might be. A motion analytics company, iinside, uses lidar sensors to detect unsafe crowding.

“We're working on tools to overlay crowd density on top of stadium maps,” iinside CEO Sam Kamel said. “These maps would then tell fans where to avoid, or when it's ‘safe’ to get a hot dog or Coke and when the food court isn't too crowded.”

There is little dispute that the game-day experience will be vastly different.

At baseball games in Taiwan, up to 1,000 spectators have been allowed into the ballpark, but they were barred from bringing food, concession stands are closed and they are told to sit three seats apart. During a recent Fubon Guardians game in New Taipei City, about 900 people showed up at its 12,500-seat stadium, leaning across empty seats to talk with friends and moving on their own to cues from cheerleaders and mascots.

It could be that way for quite a while.