Williams settles in as go-to RB for No. 2 Notre Dame 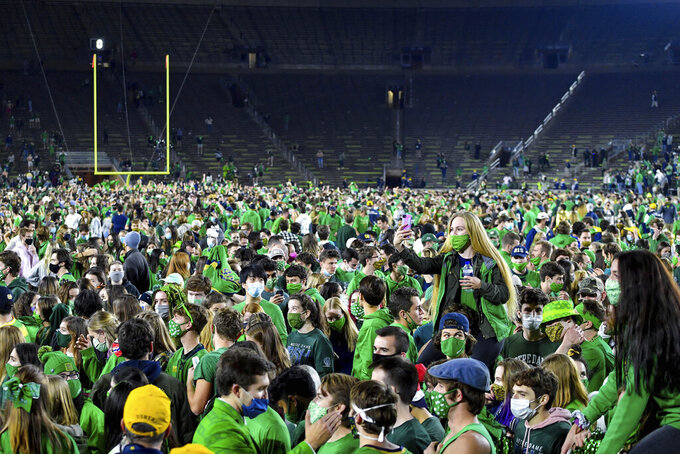 SOUTH BEND, Ind. (AP) — For the second time in as many overtimes, Kyren Williams lowered his shoulders and punched three yards forward into the end zone.

Then he waited. And hoped.

He waited for Notre Dame’s defense to seal the upset of top-ranked Clemson, the team that humiliated the Fighting Irish in a 2018 College Football Playoff semifinal just before Williams arrived on the South Bend campus as an early enrollee.

With Clemson facing fourth-and-24, Williams could stand still no longer. Gold helmet in hand, he turned to the students in the stands and screamed, “Let's go!”

The wait ended soon after, as the defense sealed the win on the next play to lock up a 47-40 thriller and send those students racing onto the field in one of the signature moments of the season so far. Williams was one of the heroes, finishing with 140 rushing yards and three touchdowns, sprinting 65 yards for the first one and adding two more in OT.

“We know what we can do,” Williams said. “We always talk about, it’s us versus us. Whenever we’re on the field, we know we need to play to our standard, rise to our standard.”

Williams rose to a new standard on Saturday night. His rushing yards alone were more than Clemson had been allowing all season (99.9 per game) and he equaled the number of rushing TDs the Tigers had given up in the opening seven games of the season.

Williams might have been the difference between playing Clemson and beating Clemson. He scored on Notre Dame’s first and last offensive plays of the game, averaged 6.1 yards per carry and added a number of blocks in blitz pickups.

Through seven games, Williams’ 740 rushing yards rank eighth in the nation. It’s far cry from his freshman year, a redshirt season that saw him rush for 26 yards in four games.

“It wasn’t my time to play, so I accepted that role,” he said. “I just needed another year to mature and become a more developed football player.”

Although Williams didn’t mind that redshirt delay, this breakout season is years in the making. His mother, Taryn, has watched Williams’ progression from a hopeful Irish recruit to the team’s lead running back.

“For so many years, we just waited for this moment,” Taryn Williams said. “We all believed and knew and had confidence that this was God’s plan for him.”

Through those years, Williams visited Notre Dame multiple times, including for a football camp he received as a Christmas gift from his grandparents during his freshman year of high school in St. Louis. The following year, Williams quit baseball to focus on football, which had always been his passion.

That passion was nurtured in driveways of his neighborhood, where Williams and his 17-year-old sister, Grace, frequently played football with friends. Grace, who committed to play college lacrosse at Missouri Western, said the siblings have always embraced a competitive mindset.

“There was no going easy on each other,” she said. “I always feel like whenever we’re together, there’s always something that one of us has to win.”

When Williams and his teammates won the biggest game of his career on Saturday, his mother and sister — as well as some of his childhood friends from St. Louis — were in Notre Dame Stadium to see it.

“My daughter and I on that first big play were channeling all of our energy down there, and then all of the sudden, he’s off with the ball,” Taryn Williams said. “We were just extremely excited.”

They watched as Williams’ dreams continued to come true for another week, dreams that included a childhood fascination with Notre Dame’s gold helmets. Next up is a visit Saturday to Boston College (5-3, 4-3 ACC) as Williams and the Fighting Irish (7-0, 6-0) pursue a playoff berth.

“We know we have to play to the highest level throughout the rest of this season” Williams said. "We’re just excited for this win, but it’s another win. We’ve got to keep going.”