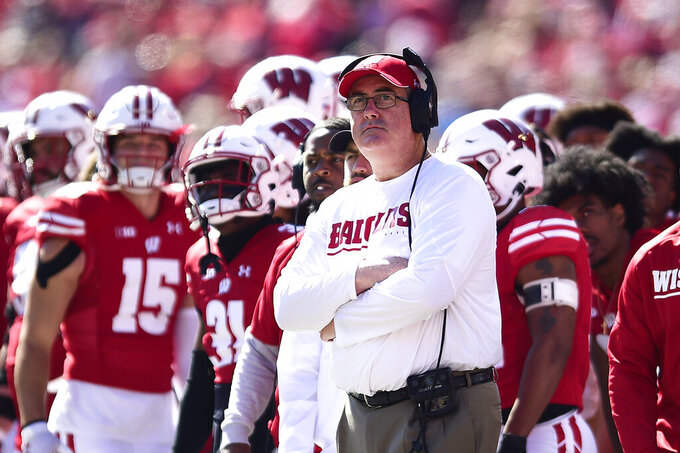 Wisconsin fired head coach Paul Chryst on Sunday after a 2-3 start to his eighth season leading the school where he played, in the city where he grew up.

The surprising move comes a day after Wisconsin lost at home 34-10 to Illinois and former Badgers coach Bret Bielema.

“This is certainly not a decision that’s taken lightly,” athletic director Chris McIntosh said at a news conference. “It’s not a game-by-game decision. This is a decision that’s based on where we’re at as a program."

Chryst was 67-26 as coach of the Badgers after being hired away from Pittsburgh. But the program has been backsliding. Chryst had double-digit victory seasons in four of his first five years at Wisconsin while winning three Big Ten West titles. The Badgers have gone 15-10 since.

"It’s a tough time to make a transition, but I felt it was the right time and that’s what led me to it,” McIntosh said.

Defensive coordinator Jim Leonhard, who was an All-American at Wisconsin, was named interim coach. The 39-year-old former NFL defensive back has been part of Chryst’s staff for seven seasons and is considered one of the top assistant coaches in the country.

McIntosh said he would do a full coaching search “when the time is right.”

Leonhard said it was an emotional day for him. Chryst gave him his start in coaching with no previous experience.

“This place means a ton to myself,” said Leonhard, who played 10 seasons in the NFL. “We want more, we want better and that’s my goal is to try to help get us in that direction.”

Wisconsin plays at Northwestern on Saturday.

Chryst, the 56-year-old Madison, Wisconsin, native, has four years left on his contract. He was set to make $5.25 million this season.

The in-season coaching move was the fifth already this season, and second of the day. Earlier Sunday, Colorado dismissed Karl Dorrell.

But none of the changes have been as unexpected as Wisconsin's.

The program has been built on stability for more than three decades since Barry Alvarez turned it around in the 1990s.

Chryst, who played quarterback for the Badgers in the late 1980s, was an assistant and offensive coordinator under Alvarez and Bielema.

The Badgers' offense, built on a powerful running game and efficient passing, has often looked stale over the last three years and struggled against better competition. Wisconsin managed only 2 yards rushing against Illinois, the program's lowest total since 2015.

“The expectations of our program at Wisconsin are to win championships and I felt that it was time, it was the right time to make a change to pursue those,” said McIntosh, a former offensive lineman at Wisconsin who replaced Alvarez as AD last year.

After Wisconsin lost to Illinois at Camp Randall Stadium on Saturday for the first time in 20 years, Chryst said he was undeterred and looked forward to getting a chance to fix the problems.

“Do you want to be better? Absolutely. And you just want to focus on the things that you can do to help move the needle, help our players and assistant coaches,” he said. “So I didn’t think it’s going to be easy, and yet I believe in this group and I like this group. I appreciate where they’re coming from and how they go about it. I look forward to each day I get to be with them.

“We get to be together again, and we’ve got to roll up our sleeves and continue to go to work.”