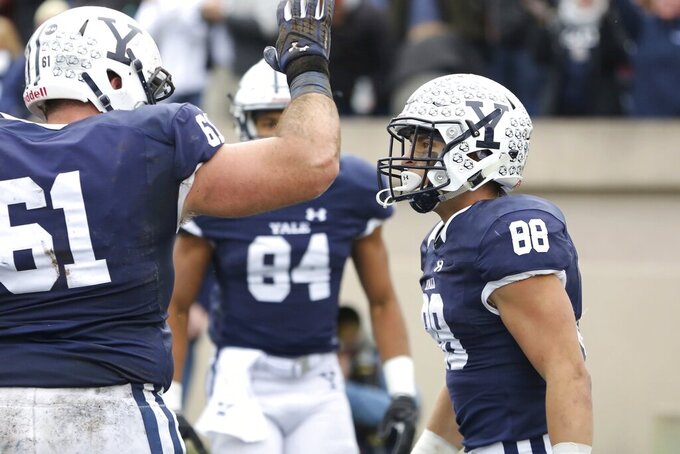 FILE - In this Nov. 18, 2017, file photo, Yale's JP Shohfi, right, celebrates with teammates after scoring a first half touchdown against Harvard during an NCAA college football game in New Haven, Conn. Yale quarterback Kurt Rawlings has rewritten the school's record books for passing, throwing the ball to Shohfi and Reed Klubnik, who he convinced to come with him to the Ivy League. (AP Photo/Gregory Payan, File)

Rawlings got on social media with JP Shohfi and Reed Klubnik, showing them his video highlights and chatting about what they could do together in the Ivy League.

“I’d say he was pretty annoying,” said Shohfi, who had more than 2,400 yards receiving as a high school star in California and was hoping to go to either Stanford or Cal. “Being able to watch his film like he said he watched ours, it was exciting to see how confident he was. It made it more exciting to think about coming here.”

Klubnik, who had been waiting in vain to hear from bigger schools in his home state of Texas, also was convinced.

“These were exactly the kind of guys we wanted,” Yale coach Tony Reno said. “We wanted to find guys with an axe to grind; guys who are really driven, who feel they’ve been wronged somewhere and feel like they should be playing at a higher level.”

Klubnik tops Yale receivers with 2,486 yards and Shohfi is second with 2,398. Klubnik needs to catch two touchdown passes against Harvard to tie former NFL tight end Eric Johnson for the most touchdown receptions in school history. Shohfi is two behind Klubnik with 19 in his career.

“We’ve been doing this for 147 years,” Reno said. “They are going to go down as three of the best who ever played at Yale, and that’s pretty unique.”

Rawlings lived with Klubnik his sophomore year and with Shohfi this year, with Klubnik in another house on the same street.

The three first got together the summer before their freshman year in New Haven and have been working ever since on and off the field to develop chemistry. When two upperclassmen got hurt, Klubnik and Shohfi gained starting roles as freshmen. Rawlings joined them for the final three games that season.

Harvard had beaten Yale nine straight times going into their freshman year matchup and appeared to be headed for a fourth straight Ivy title. Rawlings ran for 74 yards and threw for two scores, including a 3-yard pass to Klubnik with just over 4 minutes left. It turned out to be the winner.

“That year, the three of us really got the opportunity to build that bond together, in games, which is where it really matters,” Klubnik said.

But that was the only time the trio has played in The Game together.

Klubnik sustained a season-ending back injury seven games into their sophomore year, a season in which Yale would finish 9-1 and win the Ivy title. Rawlings hurt a leg last October against Penn, and Yale wound up 5-5, losing 45-27 to the Crimson.

They enter this game 8-1 and are coming off a 51-14 win over Princeton in which Rawlings threw for a Yale-record six touchdown passes and 338 yards passing. Shohfi had eight catches for 141 yards and two touchdowns. Klubnik caught three touchdown passes and had 107 yards receiving.

“I know when I just throw the ball up, it’s not a 50-50 chance they will come down with it,” Rawlings said. “It’s a 90-plus-percent chance. At this point, it’s becoming routine. If they don’t make these one-handed catches, I don’t know what’s going on with them.”

A win over Harvard would give Yale a share of the Ivy title and mark the first time since 1981 that a Yale senior class earned more than one of those.

“I don’t think any of us would have the success we’ve had without each other,” Shohfi said. “And that’s the whole offense, the line, everybody. But, I think for us to be able to feed off each other, it’s been really special. These guys are the best of the best. It’s a blessing to play with them every day.”