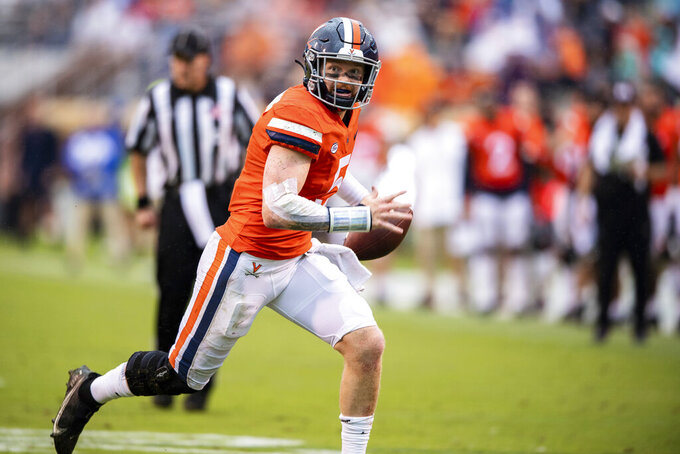 Virginia quarterback Brennan Armstrong (5) scrambles out of the pocket during the second quarter of an NCAA college football game against Duke at Scott Stadium on Saturday, Oct. 16, 2021, in Charlottesville, Va. (AP Photo/Mike Caudill)

Georgia Tech doesn't have much to show for its recent visits to Virginia.

The Yellow Jackets have lost their last three games on Cavaliers' home field, and 12 of 14 since 1992. Coach Geoff Collins hopes that is about to change.

Two weeks ago, the Yellow Jackets (3-3, 2-2 Atlantic Coast Conference) scored a touchdown with 51 seconds left to win 31-27 at Duke, their first victory there since 2013. It is one reason to ignore their history in Charlottesville.

“I think the same thing could be said about playing up in Durham as well. We just look at it one game at a time,” Collins said. “... It’s going to be a big-time environment. We just have to bring our best game. Every single game has a life of its own so we can’t worry about historical data and those kinds of things.”

The Cavaliers (5-2, 2-2) have been doing that on a steady basis, winners of three straight, including a dominant 48-0 home victory against Duke on Saturday.

Virginia coach Bronco Mendenhall understands it's human nature for his players to look at the disparity in how the Cavaliers played Duke and how the Yellow Jackets did, but he doesn't want too many conclusions drawn.

“You look for comparative scores or teams that you’ve played. But wow, it’s both relevant and dangerous at the same time because there’s just so many things that go into that beyond what just that game looks like,” he said.

And that thinking goes both ways. When the Cavaliers faced North Carolina earlier this season, they carried a four-game winning streak into the game.

If either team needed added motivation, The winner of Saturday night's game remains in contention for the Coastal Division championship. The loser will be essentially eliminated.

Some other things to watch when Georgia Tech plays at Virginia:

The Cavaliers are averaging 405.9 passing yards, second nationally, which makes their pedestrian average of 120.3 rushing yards less significant. They lead the nation with 189 first downs and are second with 3,683 yards of offense. Quarterback Brennan Armstrong has thrown 19 TD passes and six interceptions.

“He has great touch on the ball, great accuracy but he also throws the deep ball really well too. So it’s a huge challenge for us,” Collins said.

The Cavaliers have made Scott Stadium a tough place to play for all teams, not just the Yellow Jackets. They've lost just two of their last 17 games at home, including a 37-17 loss to No. 16 Wake Forest that snapped an eight-game winning streak in night games on their home turf.

The Yellow Jackets have had three wins in all three seasons under Collins, so they’d break that pattern by beating Virginia. They’re also playing for consecutive wins for the first time under Collins. Georgia Tech hasn’t had a winning streak of any length since a four-game streak in 2018.

Virginia has completed 212 passes; Georgia Tech has thrown 161. ... If yards lost on sacks didn't count against rushing totals, Armstrong would also lead the Cavaliers in rushing with 255 yards. Wayne Taulapapa leads with 204 yards. ... Seven different players have caught TD passes for Virginia led by Dontayvion Wicks with six. ... They Yellow Jackets' victory at Duke marked the first time they've scored the game-winning touchdown in the final minute since they beat Boston College in Dublin, Ireland, in 2016.