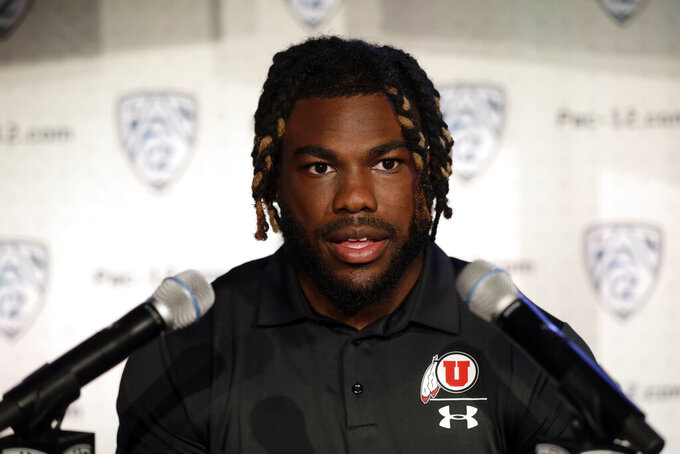 FILE - In this July 24, 2019, file photo, Utah running back Zack Moss answers questions during the Pac-12 Conference NCAA college football Media Day, in Los Angeles. Moss turned more than a few heads when he chose to return to Utah for his senior season. The decision felt like a simple one for Moss. He wanted to be the first in his family to graduate with a college degree. The 5-foot-10 running back also believed he had some unfinished business on the field. (AP Photo/Marcio Jose Sanchez, File) 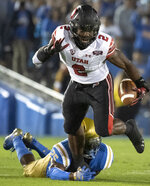 He turned more than a few heads when he chose to return to Utah for his senior season.

The decision felt like a simple one for Moss. He wanted to be the first in his family to graduate college. The 5-foot-10 running back also believed he had some unfinished business on the field.

"The only thing I'm worrying about is going out and having a successful season with my team and trying to get this Pac-12 championship down and sealed for us," Moss told reporters after the Utes opened their fall camp.

Utah has graduated from underdog to the preseason pick to win the Pac-12 title . Moss is helping to drive those expectations.

The senior ran for 1,096 yards and 11 touchdowns last season before missing Utah's final five games with a knee injury. He averaged 6.1 yards per carry and helped the Utes average 41 points per game during a four-game October winning streak that helped Utah earn the school's first Pac-12 South title a month later. The Utes lost to Washington in the Pac-12 title game.

"He's a great player and I love having him next to me," quarterback Tyler Huntley said. "I feel comfortable with him next to me. It's going to be a great season."

An evolving role appears to be in the cards for Moss. New offensive coordinator Andy Ludwig has mixed in some screen and checkdown passes to the running backs. Ludwig said his ideal number of carries per game for Moss is 20 to 23 and he wants to find ways to keep him fresh through the course of a game and the season as a whole.

It could mean that Moss, who has 38 career catches through three seasons, could be a factor as a receiver as well as a runner this year.

"He'll catch some balls," coach Kyle Whittingham said. "Not only on screen passes, but he'll be involved in some routes up the field."

Moss has a rare opportunity to become the first Utah running back to post three career 1,000-yard rushing seasons. He ranks fourth in school history with 2,651 career yards and needs just 569 yards to overtake Eddie Johnson as the career rushing yards leader.

Moss isn't focused that far ahead at the moment. His energies are devoted to rebuilding his confidence and getting back to the level he had reached before his injury in November.

"I'm going to go out here and work just like the other guys," Moss said. "Give my all. Just make sure I'm ready for Game 1. I'm not going to hold anything back."

The expectations facing Moss mirror those facing the Utes as a group. But even in the spotlight, Moss said his team has not forgotten its underdog roots.

"This team, at the heart and the core, still has an underdog mentality and it's very good for us," Moss said.