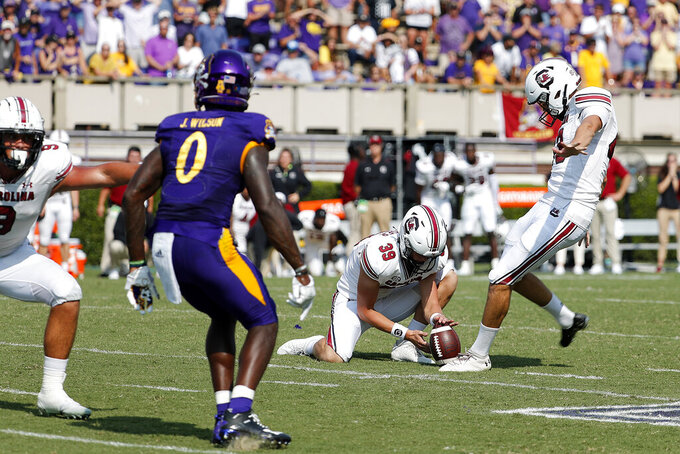 South Carolina's Parker White (43) kicks the game-winning field goal against the East Carolina in the closing seconds of the second half of an NCAA college football game in Greenville, N.C., Saturday, Sept. 11, 2021. (AP Photo/Karl B DeBlaker)

The Gamecocks, picked sixth in the seven-team SEC East Division, are 2-0 for the first time in four years and just the second time since starting 2012 with six straight wins under Steve Spurrier, who Beamer worked for at South Carolina.

Winning a third consecutive game will be difficult as South Carolina steps up in competition. After victories against Eastern Illinois and East Carolina, the Gamecocks head to No. 2 Georgia on Saturday night to open Southeastern Conference play.

“Certainly, we want to celebrate wins and we will,” Beamer said Tuesday. “But it didn’t take long to turn on the tape Sunday, and see all the stuff that we didn’t do right, as well.

“Offensively, defensively, special teams, it’s pretty obvious to our guys we’ve got a lot to get better at.”

Beamer is the first first-year South Carolina head coach to open with a pair of victories since Richard Bell did it in 1982, his only season as Gamecocks coach.

While South Carolina was favored to dispatch Eastern Illinois of the FCS and East Carolina, back-to-back wins haven't come along often in recent years for the Gamecocks. They've accomplished the feat just once in each of the previous three seasons as South Carolina went 13-22.

South Carolina easily handled Eastern Illinois 46-0 in the start to Beamer's tenure two weeks ago. It fell behind the Pirates 14-0 before rallying to a 20-17 victory on Parker White's 39-yard field goal as time expired.

Beamer has said several times a team with less fight and heart would've given up after the number of mistakes South Carolina made early at East Carolina. The Gamecocks won't have the same margin of error at Georgia if Beamer hopes to open 3-0 in his first season, something only coach Billy Laval in 1928.

Georgia, favored by 30 1-2 points according to FanDuel Sportsbook, has shown strength, speed and power throughout its lineup, Beamer said. The Gamecocks, though, can go back just a couple of years to a similarly sized upset in 2019 when 2-3 South Carolina stunned No. 3 Georgia 20-17 in double overtime.

“That atmosphere was great,” said receiver Dakereon Joyner, who played quarterback the second half and overtime in the South Carolina win due to injury to starter Ryan Hilinski. “We're looking forward to getting back there.”

Beamer believes his team's positive results come from the way they worked since he took over last December. The players haven't paid attention to those on the outside certain they'll fail this season and instead have focused on achieving goals.

“We know what we can do,” Joyner said. “The world just doesn't know.”

Georgia coach Kirby Smart is telling his team to take South Carolina seriously, especially the way the Gamecocks have played this season. Smart had Beamer on his staff for two seasons, including in 2017 when the Bulldogs reached the national championship game.

“Shane has the program rejuvenated,” Smart said. “Their fans are excited and rightfully so. They’ve been playing really hard.”

Even playing hard might not be enough to take down the Bulldogs, who already have a win over South Carolina's state rival, Clemson.

Beamer said flatly Tuesday Georgia has the most talented program in its championship history.

He hasn't spent much time discussing Georgia's talents with his players the past few days. Beamer also hasn't talked about the man he replaced in Will Muschamp, who's now serving as Smart's special team's coordinator and helping coach defensive backs with the Bulldogs.

“Let's worry about ourselves and let's get ourselves better,” Beamer said. “That's what we told them in the team meeting. We've got to be better this week than last week if we're going to be successful.”