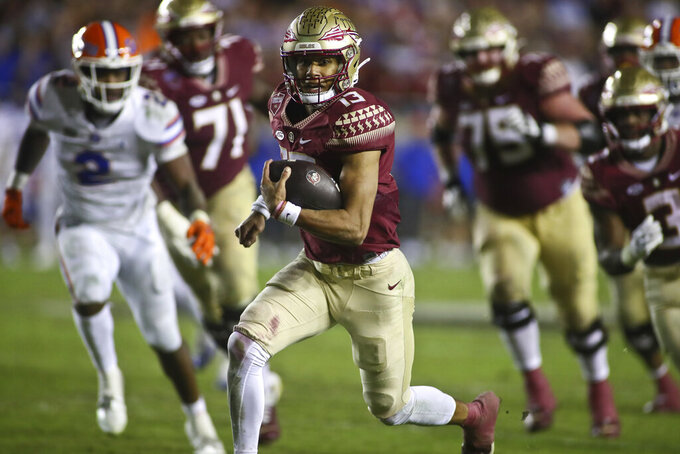 TALLAHASSEE, Fla. (AP) — Florida State quarterback Jordan Travis, the fourth player in school history to account for 3,000 yards and 30 touchdowns in a single season, is staying in school for his senior year.

Travis made the announcement Monday, the same day hundreds of players across the nation entered the NCAA transfer portal or declared for the NFL draft. Travis chose a different path and could be an early favorite in next year's Heisman Trophy race.

“So many memories have been made on this field and we’re not done yet," Travis said in a highlight video posted on social media. “See y'all in 2023.”

A fourth-year junior, Travis has 22 touchdown passes to go along with seven rushing scores, one receiving and just four interceptions. He has led the 13th-ranked Seminoles (9-3) to five consecutive wins as they prepare to play Oklahoma (6-6) in the Cheez-It Bowl on Dec. 29 in Orlando.

Travis joined FSU’s three Heisman Trophy winners — Charlie Ward in 1993, Chris Weinke in 2000 and Jameis Winston in 2013 — to account for 3,000 yards and 30 TDs in a season. He is one of six QBs in Power Five conferences with at least 20 TD passes and four or fewer interceptions.