No. 25 South Carolina looks to win 5th straight vs. Missouri 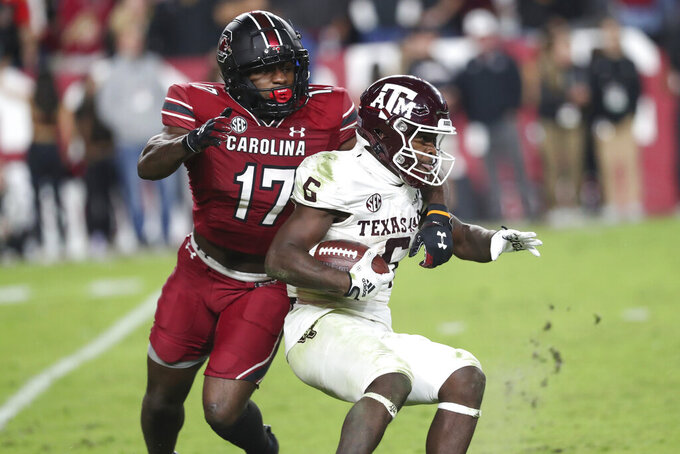 Line: South Carolina by 3 1/2, according to FanDuel Sportsbook.

South Carolina will look to win its first game as a ranked team in five years and continue its longest SEC winning streak when it plays Missouri. The Gamecocks haven't won three straight in league play since 2017. Missouri opened SEC play with consecutive losses before defeating Vanderbilt last week and will hope to keep the success going. The winner gets the Mayor's Cup since both flagship schools are located in Columbia of their respective state.

South Carolina RB MarShawn Lloyd vs. Missouri's run defense. Lloyd has emerged as one of the Gamecocks top playmakers, second in the SEC with nine rushing TDs and averaging more than 5.6 yards a carry this season. The Tigers are fifth in the 14-team lead at stopping the run, giving up just 125 yards a game this season.

Missouri: WR Dominic Lovett has been the Tigers' top pass catcher and averaging nearly 15 yards a reception this season. His 35 catches are second in the SEC behind Tennessee's Jaylin Hyatt.

South Carolina: DE Jordan Burch, a five-star defensive lineman out of high school, is finally looking like one of the country's top defenders as he's clogged up the middle of the line. Burch leads the Gamecocks with five tackles for loss and 2 1/2 sacks. He's third on the team with 34 tackles.

This is the first time South Carolina has made the Top 25 under second-year coach Shane Beamer. ... The Gamecocks are 5-0 this season when getting a turnover and 0-2 when they don't. ... Missouri sits second in the SEC on stopping third downs, holding opponents to less than 30% (30 of 103) this season. ... Beamer Ball, the next generation, is making its appearance at South Carolina where the team leads the SEC with five blocked kicks, tying Central Michigan for the national lead. The Gamecocks opened the win over Texas A&M with Xavier Legette's kickoff return TD, their first since Deebo Samuel's 90-yard kickoff score against Ole Miss in 2018. ... Missouri has won five of the past eight against South Carolina, three of them coming by seven points or less.