No. 25 South Carolina takes on Missouri looking for more 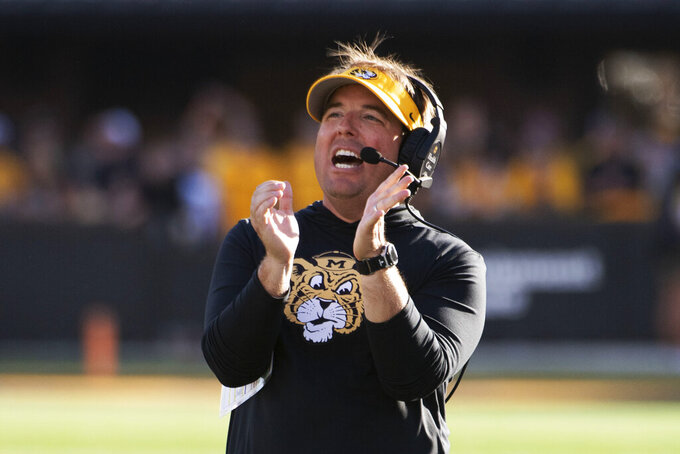 COLUMBIA, S.C. (AP) — No. 25 South Carolina is thrilled by its first ranking in four years and longest win streak in nearly a decade.

Fourth-year defensive back Cam Smith was asked this week how he planned to keep his younger teammates focused on the field and not the midseason success.

“I've never been ranked, I've never won this much, so it's new to me, too," said Smith, the Gamecocks' nickelback considered a first-round NFL selection should he turn pro.

“Just trying to take it day by day and make sure everybody stay their course,” Smith said. “Then it'll be alright.”

South Carolina appeared early on that it might not live up to last year's bowl-qualifying team in coach Shane Beamer's first season, falling to top-10 teams in Arkansas (44-31) and Georgia (48-7) in two of its first three games.

Things turned with consecutive non-conference wins over Charlotte and South Carolina State where the Gamecocks scored 50 or more points in both. A surprise win at then-13th-ranked Kentucky, 24-14, followed before South Carolina toppled Texas A&M, 30-24, for its first victory in the series.

They made the rankings for the first time early in the 2018 season. They hadn't won four in a row since closing 2013 with six consecutive victories.

Beamer acknowledged his excitement at his first time having a Top 25 team as a head coach. He quickly snapped things back to the Tigers this week, who have won the past three over South Carolina.

The Gamecocks have had their minds in the right place during practice, Beamer said, focused on how they worked instead of thinking they've arrived.

The Gamecocks have excelled at gaining “good field position and the ability to play with the lead. Creating havoc plays, forcing third and long and then capitalizing on special teams," he said. "They been able to create huge momentum swings."

Missouri will honor those who died and those injured at a school shooting in St. Louis at Saturday's game. Tigers coach Eli Drinkwitz said: “For me, it’s not political at all. It’s about protecting the future of our country, and our children are our future. And we cannot continue to live like this.”

It's the second straight week South Carolina is playing for a trophy, this time the Mayor's Cup which has been contested annually since Missouri came into the SEC East Division in 2012. The trophy was named because both school's are based in the Columbia of their state. The Gamecocks beat Texas A&M last week to win the Bonham Trophy, contested each year when the team's meet.

Five-star freshman Luther Burden III is showing his immense talent at receiver since picking Missouri over powers like Georgia, Alabama and Ohio State among many, many others. Burden caught one touchdown and rushed for another in a 17-14 win over Vanderbilt that snapped the Tigers' 0-3 start in SEC play. Burden leads the Tigers with five touchdowns, two receiving, two rushing and one punt return.

Missouri is fourth in SEC defense at 325 yards a game. The group is also among the leaders at stopping teams on third down, holding opponents to fewer than 30 percent on their chances (30 of 103) which is second only to Alabama. Linebacker Ty'Ron Hopper is second in the league with 8.5 tackles for loss.

South Carolina coach Shane Beamer appears to be a chip off the old punt block. The Gamecocks lead the country with five blocked punts and have fans cheering for “Beamer Ball,” the brand of top-notch special teams Beamer's dad, Frank, made famous in nearly 30 years at Virginia Tech.