No. 7 Cincinnati faces 'measuring stick' against No. 9 Irish 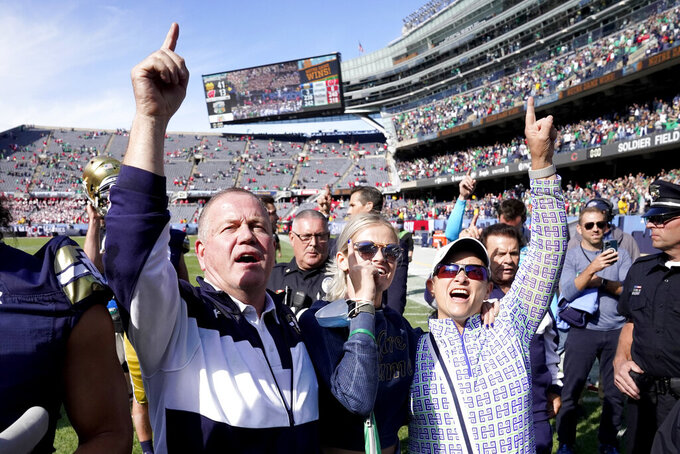 The team hotel in South Bend, Indiana, is just a few minutes away from Notre Dame Stadium, where No. 7 Cincinnati (3-0) will face the ninth-ranked Fighting Irish (4-0) on Saturday in the first top-10, regular-season matchup ever for the Bearcats.

Coach Luke Fickell said the plan is to take the team to the stadium, let the players get a good look at “Touchdown Jesus,” take a few pictures and soak in one of the most storied venues in college football. It's not exactly coach Norman Dale having his players measure the height of the basket before the state championship game in the movie “Hoosiers,” but the idea is similar.

“When you go over there on Saturday you want them focused on the things they got to do,” Fickell said. “It's already going to be difficult enough to not have any of those other distractions."

Cincinnati has a team that could be the first from outside the Power Five conferences to make the College Football Playoff. It is, without question, a long shot that would require more than a few things to break the Bearcats' way.

September has worked out pretty well on that front.

Perennial playoff contenders No. 11 Ohio State and No. 25 Clemson lost three games combined. No. 6 Oklahoma has looked vulnerable in the Big 12. Cincinnati is going to need some chaos in the Power Five conferences to have any chance to pull this off, but 25 ranked teams losing over the first four weeks of the season suggests the next couple of months could get weird.

Of course, all that is moot if Cincinnati doesn't win all its games and Saturday's against the Fighting Irish might be the toughest.

Fickell and his team are trying to both embrace the enormity of the opportunity and stick to business as usual this week.

“It's big. We're not going to lie to you,” Fickell said. “But like I said once the thing kicks off you can’t let all the emotions of all that different stuff that's going on affect how you go about things. What I mean by that is the emotions throughout the week that can drain you because you need to be at your best on Saturday. You get to Saturday and what do you have left?”

There is no blueprint for a team from a so-called Group of Five conference to make the playoff because in seven years of the CFP it has never come close to happening.

In theory, though, to break the glass ceiling, a team would need to have built up its bona fides in preceding seasons. Cincinnati has checked that box, going 31-6 over the previous three years under Fickell, the former Ohio State linebacker and assistant coach.

The Bearcats won the American Athletic Conference and played Georgia in the Sugar Bowl last season, losing on a long field goal in the closing seconds.

Returning most of the key players from that team, including star quarterback Desmond Ridder, Cincinnati started this season ranked No. 8 in the AP poll.

The next step is to have tough nonconference schedule. It looked as if the Bearcats could check that box, too, with Indiana and Notre Dame. The Hoosiers are unranked now having lost twice so it remains to be seen if they will help out Cincinnati by bouncing back and having a quality season.

The Irish were far from perfect in September, but the record still is perfect as they enter October. And while Notre Dame has had some high-profile postseason flameouts recently, the list of programs with a better winning percentage (.881) over the last three-plus seasons is impressive: Alabama, Clemson, Ohio State.

“It is definitely a measuring stick (game),” Fickell said.

Much has been made this week about how Notre Dame defensive coordinator Marcus Freeman will be facing his close friend Fickell and many of the players he coached before leaving Cincinnati for the Irish after last season.

Kelly will also be facing a former coordinator. Cincinnati offensive coordinator Mike Denbrock was at Notre Dame from 2010-16. After a 4-8 season, Kelly turned over much of his staff, including Denbrock. He also worked for Kelly at Division II Grand Valley State in the 1990s.

“We’re great friends and we stay in constant contact, but we’re great competitors, too,” Kelly said. "He wants to beat us and I want to beat him and he wouldn’t want it any other way.”

Kelly said Thursday that quarterback Jack Coan, who left last week's victory against Wisconsin in the third quarter with an ankle injury, was ahead in his recovery of where the staff thought he would be. He split first-team reps in practice with Drew Pyne early in the week.

Kelly also said freshman quarterback Tyler Buchner, who missed the last game with a hamstring injury, has also been practicing. The Irish have used Buchner to boost a struggling running game.

"We’re getting all three of them ready right now,” Kelly said.