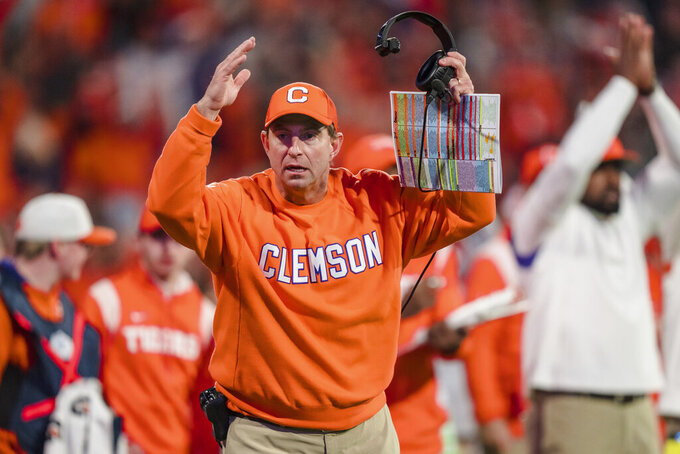 Braggin’ rights, along with a chance at history for Clemson. The Tigers have won the past seven games over the rival Gamecocks. An eighth would mark the longest streak of success since these Palmetto State schools first played in 1896. A Clemson victory would also keep them in the mix for a College Football Playoff spot, although it would likely need outside help to jump into the top four.

South Carolina QB Spencer Rattler against Clemson's pass rush. Rattler has looked, well, rattled for much of the season until a stunning, 63-38, win over then-No. 5 Tennessee where he threw for 438 yards and a school record six touchdowns. The Tigers defense has been active since a 35-14 loss at Notre Dame on Nov. 5, collecting nine sacks in wins over Louisville and Miami the past two weeks.

South Carolina: Jaheim Bell is an all-SEC tight end who has lined up at running back with leading rushers MarShawn Lloyd and Christian Beal-Smith hurt the past two weeks. Bell showed his versatility a week ago. He had 17 carries for 82 yards and six catches, two for touchdowns.

Clemson: LB Jeremiah Trotter Jr. has come into his own the past two weeks with 20 tackles combined in wins over Louisville and Miami. The son of the longtime NFL defender is second on the Tigers with 65 stops this season with six tackles for loss and five pass breakups.

Clemson has won seven straight in the rivalry series following South Carolina's longest-ever run of success of five straight games from 2009-13. ... The Tigers would surpass the seven straight won by Clemson from 1934-40. ... South Carolina has lost six of the seven straight by 18 points or more, its closest defeat coming in a 37-32 loss in 2015. ... Clemson is seeking its 41st straight win at home to extend its ACC record. ... South Carolina special teams coordinator Pete Lembo is among 15 finalists for the Broyles Award, which goes to the top assistant in college football. ... South Carolina finished 4-4, third in the SEC East Division. It's the first time the Gamecocks have been at .500 or better in league play since Will Muschamp went 4-4 in 2018. ... A Clemson win would give them 11 or more wins for the eighth time in the past 11 seasons.