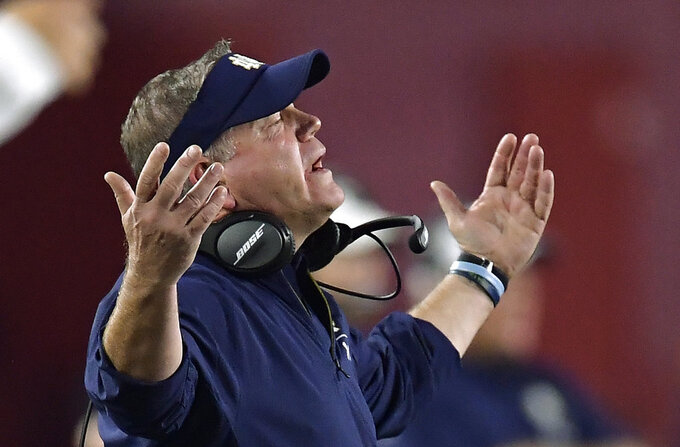 LOS ANGELES (AP) — Two years ago, Notre Dame left the LA Memorial Coliseum with its program at a crossroads following a 4-8 season. Even though most thought coach Brian Kelly was on the hot seat, athletic director Jack Swarbrick had confidence that Kelly could turn things around.

Swarbrick's confidence was rewarded on that same field on Saturday. The third-ranked Fighting Irish wrapped up an unbeaten regular season with a 24-17 victory over USC and all but assured themselves a spot in the College Football Playoff.

"It's that 24-month cycle. From everyone in that room saying we were going to get it fixed to it happening. It feels good," Swarbrick said outside the locker room after the game.

It is the third time in program history Notre Dame has been 12-0, joining the 1988 national championship team and 2012 squad that made it to the Bowl Championship Series final before losing to Alabama.

While many were clamoring for Kelly's ouster two years ago, Swarbrick said that midseason there wasn't going to be a change. What both did do at the end of the season was examine everything about the program, from coaches to practice methods to nutrition.

Kelly hired new coordinators for offense, defense and special teams as well as a new strength coach. The result has been 22 victories in the past 25 games.

"We made changes, but we still had a core and a foundation," Kelly said. "It still had to do with player development. We got our players to play at a higher level with better execution. Behind the scenes we did make some tweaks, but we won on the backs of players making plays."

Senior linebacker Drue Tranquill said it was a special moment for the upperclassmen who were able to turn things around after the disappointment of two years ago.

"I came to Notre Dame for the tradition of excellence, the tradition of football, and for a while there, we weren't building that tradition," Tranquill said. "We weren't keeping that legacy going. We stared ourselves in the mirror two years ago and made a choice and said, 'We're going to decide where this ship goes.' And I'm just so proud of all the guys in the locker room. It's just a special moment, man."

Notre Dame started last season 8-1 and was in the playoff conversation before dropping two of its last three. It went into the offseason with some momentum after a 21-17 victory over LSU in the Citrus Bowl, which included quarterback Ian Book coming off the bench to rally the Fighting Irish.

Swarbrick said last season's start as well as the Citrus Bowl victory helped serve as the springboard to this year. He also said this is the first season he can remember in his 11 years that a player hasn't been on academic probation or subject to off-field discipline.

"There is a consistency and culture that is self-sustaining. This is the best foundation we've had since I've been here," he said. "Brian is as comfortable in his own skin as someone who I have been around. He is really balanced. We all have highs and lows but he is deliberate, sets a path and follows it."

Swarbrick also noted that Kelly has already accomplished something that Leahy, Parseghian, Knute Rockne or Lou Holtz didn't do — coach the program at 60.

Kelly wasn't ready to be philosophical following his third undefeated season as a head coach, but he did acknowledge that this one was more difficult than it was in 2012 and 2009 at Cincinnati. Kelly led the Bearcats to a 12-0 regular season but accepted the Notre Dame job before the Sugar Bowl.

"They're all difficult because you deal with distractions. There is so much in social media and so much that can distract you from the process on a day-to-day basis. It just makes it hard," Kelly said. "Our kids did a great job of sticking with it and not getting outside of that. This was the hardest of the three."

Notre Dame will watch the rankings show on Tuesday and then Sunday's bowl selections. With four wins over Top 25 teams, the Fighting Irish could face Clemson in the Orange Bowl on Dec. 28 if current form holds.

"To win every week with the schedule we play. We're in LA this week. I think. We're like a Broadway show. Coming to a city near you. New York, San Diego. With some rest and a neutral site, we'll be even better," he said.