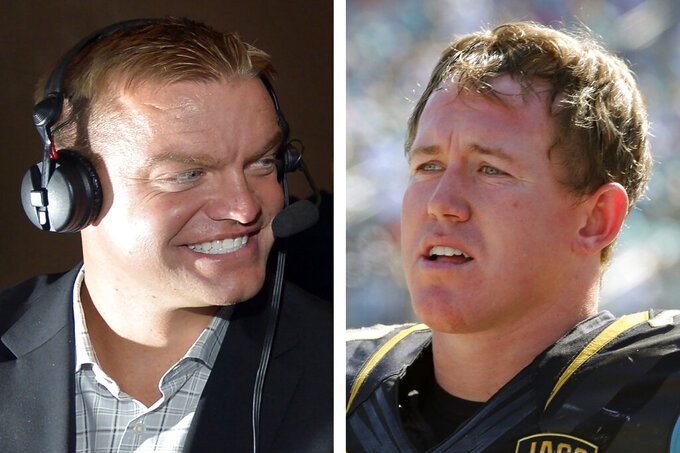 FILE - At left, former NFL and Univ. of Washington NCAA college football player Brock Huard talks on a radio show in New York. At right, former NFL and Univ. of Stanford football player Toby Gerhart watches play on the field from the sidelines during the first half of an NFL football game in Jacksonville, Fla. The Pac-12 is tapping into former football stars such as Brock Huard, Toby Gerhart and Lincoln Kennedy as it explores ways to boosts the conference’s fortunes on the field and off. The conference announced Monday, Dec. 20, 2021, the formation of the Pac-12 Football Alumni Council. (AP Photo/File)

The Pac-12 is tapping into former football stars such as Brock Huard, Toby Gerhart and Lincoln Kennedy as it explores ways to boosts the conference’s fortunes on the field and off.

The conference announced Monday the formation of the Pac-12 Football Alumni Council.

A football think tank of sorts, the council has discussed a wide range of topics from football scheduling and recruiting to brand-building and marketing.

“We just have so many substantive changes that have to happen over the coming months and years ahead, that it would really be negligent if that group did not have a voice in those changes," Hanks told The Associated Press.

The Pac-12 has not had a team selected to the College Football Playoff since 2016, and it has been shut out of the CFP in six of eight years.

Pac-12 Commissioner George Kliavkoff has stressed since being hired last spring that improving the conference's football and maximizing CFP selections are his priority.

“Just the interactions I’ve had with him to this point have been very encouraging. I think for others on this council as well. I think they felt that same sense of purpose and urgency," Huard said.

A former Washington quarterback who currently is calling games as an analyst for Fox Sports, Huard said his interactions with Kliavkoff have been encouraging and helped motivate him and others to get involved.

Huard said the council is more than ceremonial.

“It is much more about passion and wanting to see and hopefully help in some positive change,” he said.

Because college football is in the midst of massive changes, from conference realignment to playoff expansion and less restrictive transfer rules to athletes being paid endorsers, Huard sees an opportunity for the Pac-12 to improve its position quickly.

"I think there is more opportunity than there was five years ago to change your narrative and to do it in a hurry," he said.

Huard said members of the council have discussed how they can personally engage alumni bases of Pac-12 schools and encourage them to be more involved with their favorite teams. They have talked about promoting programs with an eye on increasing attendance, and, maybe most importantly, working to get the word out to recruits in the Pac-12 footprint that they don't have to leave the West Coast to play college football at the highest level.

“This is a group that's serious about spending time to do what we can do to aid (the Pac-12),” Huard said.

Former Southern California All-American Tim McDonald, who played defensive back in the NFL for 13 years, said having former Pac-12 stars selling the conference to recruits can send a powerful message.

“There's a lot that the Pac-12 has to offer,” McDonald said. “I just think we have lost too many kids.”

McDonald said aside from the two official meetings of the alumni council, he has had informal discussions with members about how they can fuel a Pac-12 turnaround. And the group is trying to get more Pac-12 greats involved.

“That’s the ultimate goal,” McDonald said. “We want that alumni crowd as big as possible at games to make sure the student-athletes feel us.”

The other members of the alumni committee include Scooby Wright and Brandon Sanders from Arizona; Eric Allen from Arizona State; Justin Forsett and Shane Vereen from Cal; Chad Brown and Mike Pritchard from Colorado; Mike Bellotti from Oregon; Steven Jackson from Oregon State; Toi Cook from Stanford; Johnathan Franklin and Marcedes Lewis from UCLA; Derrick Deese from USC; Steve Smith from Utah; Dana Hall from Washington; and Jack Thompson from Washington State.