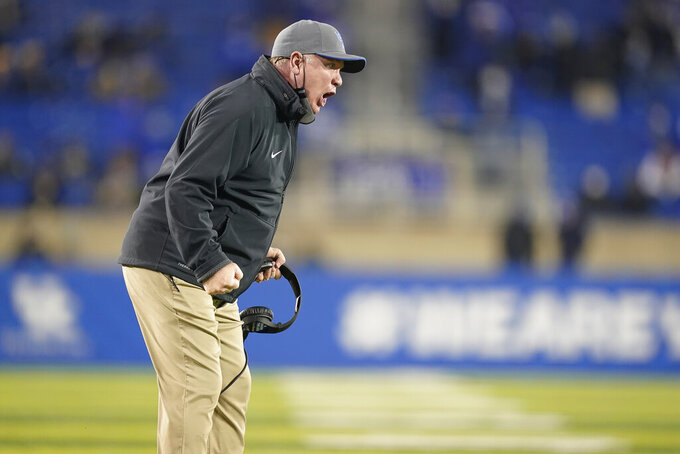 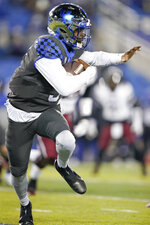 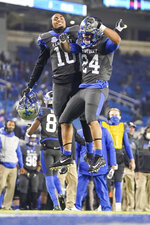 “Through a difficult, trying season, they really laid it on the line tonight,” Wildcats coach Mark Stoops said. “That’s what I’m most proud of. ... Their mindset was right, their effort was right. It wasn’t perfect, but they really played hard.”

The loss capped an 0-3 stint for South Carolina interim coach Mike Bobo, who replaced Will Muschamp following his firing on Nov. 15.

A source close to the coaching search told The Associated Press on Saturday night that Shane Beamer will be hired to take over the program. The person spoke to the AP on the condition of anonymity because South Carolina has not yet made the hire official. Beamer is the son of former Virginia Tech coach Frank Beamer and served on the Gamecocks’ staff from 2007-2010 under former coach Steve Spurrier.

Said Bobo, "We’ll get back and we’ll talk to administration and see where we go from here as a staff in the direction that they give us.”

Looking to halt a two-game slide and remain in consideration for the postseason, the Wildcats (4-6, 4-6 Southeastern Conference) scored on five of their first seven possessions to lead 27-3 at halftime. Their highest first-half output this season was aided by 10 points off two of their four takeaways, including two fumble recoveries by Jordan Wright.

Kentucky’s first drive helped set the tone as they took over after a missed Gamecocks field goal and drove 75 yards for Matt Ruffolo’s 22-yard field goal. He later added one from 41 yards.

Rodriguez returned from a two-game absence to rush for first-half TDs of 1 and 2 yards around Rose’s 8-yard score before sealing the rout with a 79-yard burst down the left side with 4:56 remaining. Wilson added a 1-yard TD run early in the third quarter as the Wildcats outgained the Gamecocks (2-8, 2-8) 492-404.

Wilson, the senior quarterback, finished 17 of 26 passing for 201 yards and rushed for 46 to break 1,000 career. Rodriguez had 139 yards on 14 carries and Rose 101 on 14 carries as Kentucky dealt South Carolina its sixth consecutive loss.

Kevin Harris rushed for 210 yards and a touchdown on 21 carries to become the ninth Gamecock with 1,000 in a season. Luke Doty's 30-yard TD pass to Dakereon Joyner and two-point conversion to Nick Muse with 5:12 left made it 34-18 before Rodriguez's big TD run.

“I mean, it felt good," Harris said of his second 200-yard game this season. "My offensive line did a good job holding me and stuff, so I appreciate the help.”

MILESTONES Needing 47 yards to move into the top 10 on Kentucky's career rushing list, Rose broke through in the first half and has 1,823. He also broke 2,000 career purpose yards. Wilson became the 40th Wildcat to break 1,000 career yards rushing.

South Carolina: A costly holding penalty as they drove to the Kentucky 9 on the opening possession set the Gamecocks back before they missed the field goal. Turnovers followed along with their failure to slow the Wildcats, digging a deep hole they couldn't climb from and likely ended their season despite rushing for 297 yards.

“They got us a couple times on the run and in play-action passes,” Bobo said. “We had them at some third downs there in the first half. Just didn’t have enough tonight, but again, I appreciate our kids fighting in the second half.”

Kentucky: Needing a lift after consecutive thumpings by top-ranked Alabama and No. 6 Florida, the Wildcats quickly imposed their will on the Gamecocks. That built a big cushion and more importantly, they added to it for a change after struggling with complete games. Impressive considering they played without 17 players, including five starters. They now wait to see if they’ll continue playing December football.

Kentucky: Waits to see if the postseason is still a possibility when bowl berths are announced on Dec. 20.