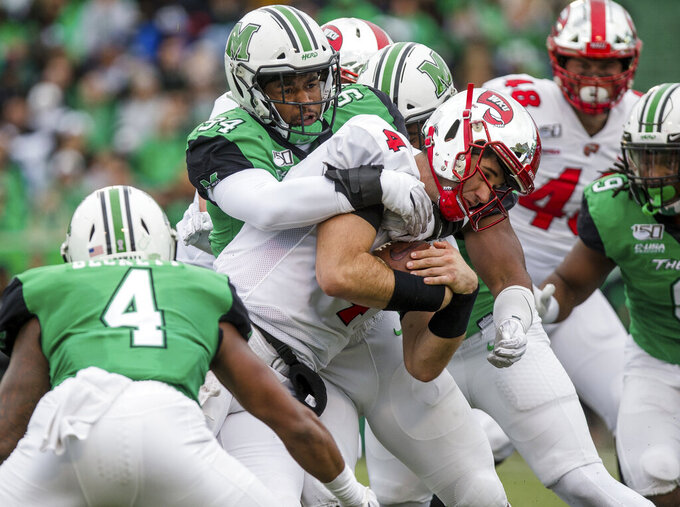 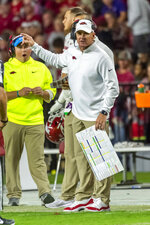 The quarterback's impact could be significant again, even though he has transferred. Storey and Western Kentucky visit the Razorbacks on Saturday for both teams' final nonconference game of the season.

Storey was Arkansas' starting quarterback for a stint last year, Chad Morris' first coaching the Razorbacks. Storey took a lot of blame for Arkansas' 2-10 record and, with a year of eligibility left, transferred to Western Kentucky. The fifth-year senior now looks like a different quarterback: He has completed nearly 70% of his passes this season for 1,477 yards, seven touchdowns and five interceptions.

While Arkansas (2-7) is no longer a contender for a bowl berth, the Hilltoppers (5-4) need just one win in their final three games to become bowl eligible. Storey, one of the most highly touted Arkansas-raised quarterbacks in a generation, downplayed the history with his former team.

"We've got to get a win," he said. "The last two weeks have been rough on us. Hopefully things work out and we can be in that game. It's going to be a fun test."

Arkansas' 54-24 loss to Mississippi State last week ensured a third straight losing season. Morris has yet to win an SEC game in his two seasons thus far and he is only 4-3 in nonconference games, including losses to Colorado State, North Texas and San Jose State.

A .500 record against those teams and the likes of Eastern Illinois, Tulsa, Portland State and Western Kentucky is not the type of results expected when Morris replaced Bret Bielema in December 2017. Morris has relied on a youth movement, one that has seen him replace his two upperclassmen quarterbacks with a pair of freshmen, K.J. Jefferson and John Stephen Jones, at the top of his depth chart at the position.

"They will add to the list of freshmen and sophomores that we've started this year," Morris said. "I believe about half our starters this season have been freshmen or sophomores."

Ben Hicks and Nick Starkel, who have both started at QB at times this season, are giving way this week to Jones, the grandson of Dallas Cowboys owner Jerry Jones, a co-captain on Arkansas' 1964 national title team.

The younger Jones played in three games last season and two more this year, going 10 of 16 for 74 yards with two touchdowns. Jefferson gave Arkansas fans something to yell for against the Bulldogs when he took the Razorbacks 75 yards on four plays for a score in his first collegiate drive.

Tight end Cheyenne O'Grady has been removed from the team. O'Grady was suspended before the Mississippi State game, then he posted a cryptic message the night before the game suggesting his time with the Razorbacks was over. Morris had originally said the two would meet Sunday. Morris announced the decision Monday.

O'Grady was Arkansas' best chance at an All-SEC first-team selection this year. He was the team leader in catches (33), receiving yards (372) and touchdowns (3).

Another loss for the Razorbacks would clinch the worst two-year winning percentage in school history. The only other time Arkansas won four or fewer games in school history was in 1931 and 1932, when the team went 3-5-1 and then 1-6-2.

Western Kentucky wide receivers Lucky Jackson (55) and Jahcour Pearson (51) are the second- and third-leading pass catchers in Conference USA. Running back Gaej Walker (783) has the third most yards on the ground in the league. Western Kentucky also has the second-ranked scoring defense in the conference, allowing 20.7 points per game, or 14.5 fewer than Arkansas in the SEC.