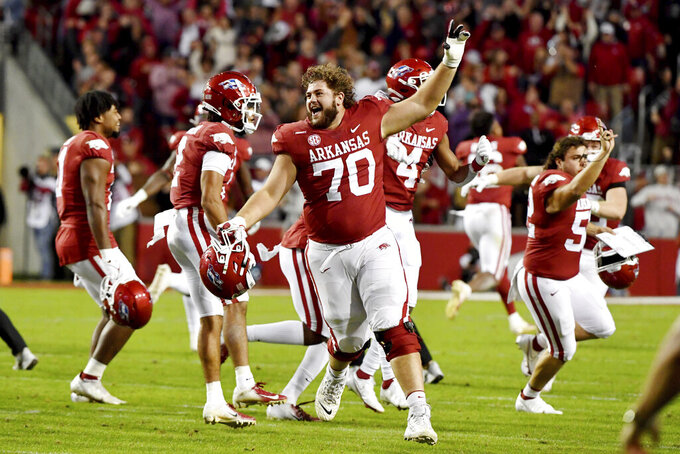 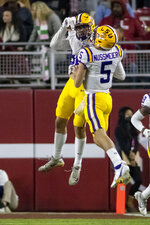 He only had to show them video of the Tigers' threatening to upset No. 3 Alabama on the final play of LSU's game in Tuscaloosa last weekend.

“LSU’s talented. They’re LSU,” Pittman said. “They were inspired to play and played extremely well and obviously had a chance to win it there at the end.”

LSU (4-5, 2-4) needs two victories in its final three games if the Tigers want to send outgoing coach Ed Orgeron off with a trip to a bowl game.

That sets the stage for a competitive contest when Arkansas (6-3, 2-3 SEC) visits Death Valley on Saturday night. At least, that's what oddsmakers are forecasting. Arkansas comes in as a 2 1/2-point favorite, according to Fanduel SportsBook.

Orgeron emerged from the Tigers' 20-14 loss at Alabama optimistic that LSU will “finish strong."

“I feel good about the mindset of the team,” Orgeron said. “I told them: ‘You play like this, we may win the rest of our games and go to a bowl.’ And they deserve that."

Adding intrigue to this matchup is Orgeron's decision to allow freshman quarterback Garrett Nussmeier, who has been a backup all season, to compete this week for the starting job with Max Johnson.

Orgeron said he plans to have both quarterbacks play against Arkansas, and then let the one who performs better start the final two regular season games.

Arkansas (6-3, 2-3 SEC), which sits 25th in this week’s College Football Playoff standings, was once ranked as high as eighth in the AP Top 25 before losses to No. 1 Georgia, No. 12 Ole Miss and No. 16 Auburn dropped them out of the poll.

Pittman said rankings are important to his program, but he doesn't buy the notion that the Hogs didn't handle their early season success well.

Orgeron, who in past weeks had suggested he'd cut off Nussmeier's playing time to prevent him from losing a year of college eligibility this season, said he changed his stance this week after talking with Nussmeier and his family. But Orgeron also stressed that he was not pressured by Nussmeier's family to re-open competition with Johnson at QB.

“I wanted to make sure the family and I was on the same page,” Orgeron said Wednesday. “There was nobody dictating to me.

“I was protecting Garrett. I wasn’t going to put him in and burn his redshirt,” Orgeron added. “That’s a decision, to me, a family has to make and they made that decision, so we’re going for it.”

Johnson, the son of former NFL QB Chad Johnson, is a sophomore who got his first starts at the end of his freshman year. Nussmeier's father, Doug, also is a former NFL QB who is currently quarterbacks coach with the Dallas Cowboys.

Johnson has passed for 2,169 yards and 22 TDs vs six interceptions in nine games this season. Nussmeier has appeared in three games, passing for 150 yards and one TD without a turnover.

Running back Dominique Johnson, who opened the season as a third-string running back, is now in line to start for the third time in four games at LSU after increasingly exceeding coaches' expectations as the season wore on.

“I never believed that he would be the back that he is at this point,” Pittman said of the 6-foot-1, 235-pound sophomore, who carried 17 times for 107 yards and two TDs in a victory over Mississippi State last week.

Earlier, this season, coaches briefly moved Johnson to tight end until injuries prompted them to move him back to running back.

“Basically I think he came back with the attitude of: ‘I’m going to show you that you should have never moved me,’" Pittman said. "He was very respectful when I moved him, but he showed me that I was 100% wrong about him.

“He’s not the fastest back, but he does have the ability to make you miss, he has the ability to run over you,” Pittman added. "He’s the best back we have currently on the football team and we’re very, very proud of him.”