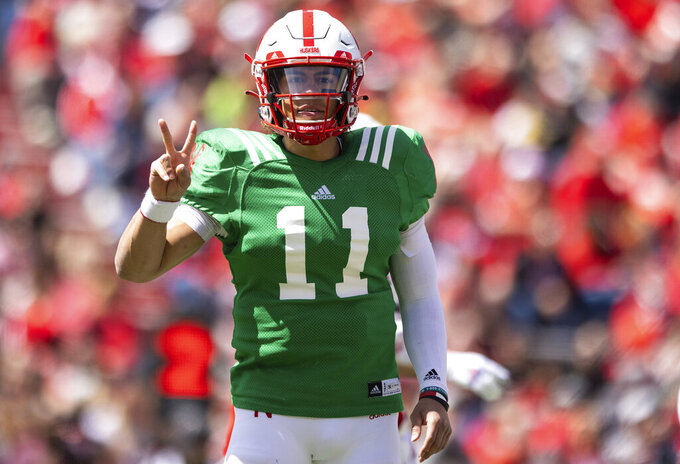 Coordinator changes and heavy player personnel losses made it a spring of uncertainty for the top Big Ten defenses.

Start with Wisconsin, which has been in the national top five in total defense three straight years and lower than that just twice since 2014. The Badgers must replace eight of their top 10 tacklers.

Penn State, in the top 10 in scoring defense three of the last five seasons, has a new coordinator in Manny Diaz. The former Miami coach spent the spring fitting pieces together to compensate for the loss of as many as six players who could be drafted.

Ohio State also is retooling its defense after it got exposed early last season against Oregon and again in a 42-27 loss to Michigan. Coordinator Kerry Coombs was fired and Jim Knowles, who excelled as Oklahoma State's coordinator, was hired and began installing a 4-2-5 scheme.

“The biggest revelation of the spring was that regardless of talent, these players that we have, they want to learn. They soaked up everything I did,” Knowles said. “They’re just into it; into football, into us, into culture change and the way we run meetings. They picked it up. I mean, they picked it up at a high speed.”

There is plenty of starting quarterback experience around the league. Ten of the top 11 passers return, including the top three — C.J. Stroud of Ohio State, Aidan O'Connell of Purdue and Taulia Tagovailoa of Maryland.

Six teams, at most, are exploring their options.

Iowa, which won the West despite having one of the least productive offenses in the nation, opened up the competition between Spencer Petras and Alex Padilla.

Syracuse transfer Tommy DeVito stood out in Illinois' spring game but will be pushed in the preseason when Artur Sitkowski returns from injury. Ryan Hilinski is first in line at Northwestern, though he had some shaky performances last season.

With J.J. McCarthy still recovering from a shoulder injury, an expected competition at Michigan didn’t materialize between him and incumbent Cade McNamara.

At Nebraska, all signs point to Texas transfer Casey Thompson taking over for Adrian Martinez, the four-year starter who transferred to Kansas State.

Kenneth Walker III was a revelation right away for Michigan State, running 75 yards for a touchdown on the first play from scrimmage in the opener against Northwestern. The Wake Forest transfer went on to lead the Big Ten in rushing and win the Doak Walker Award.

With Walker gone, the Spartans are hoping to have similar results with another transfer, either Jalen Berger or Jarek Broussard.

Berger was Wisconsin's leading rusher in 2020 before he lost his job to Braelon Allen and was dismissed from the team a month into the 2021 season.

Berger appears to have come out of spring No. 1 on the depth chart, but more competition in one the way. Broussard is scheduled to arrive next month from Colorado, where he was Pac-12 offensive player of the year in 2020 and received All-Pac 12 honorable mention last year.

Sixth-year center John Michael Schmitz is Minnesota's only returning starter from a unit that led the country with 235 combined career starts and is expected to produce multiple draft picks.

Alex Ruschmeyer, who can play guard and tackle, is the second-most experienced lineman behind Schmitz. Tackle Aireontae Ersery might have the highest ceiling.

“Brian Callahan is one of the best developers of talent when we’re talking about offensive line play and if there is anybody who needs a challenge like that, Brian Callahan can nail it and crush it,” coach P.J. Fleck said.

Notable: Nebraska was supposed to play Illinois in Ireland last year but the trip was canceled because of the pandemic. ... The Illini get only five days between their first and second games.