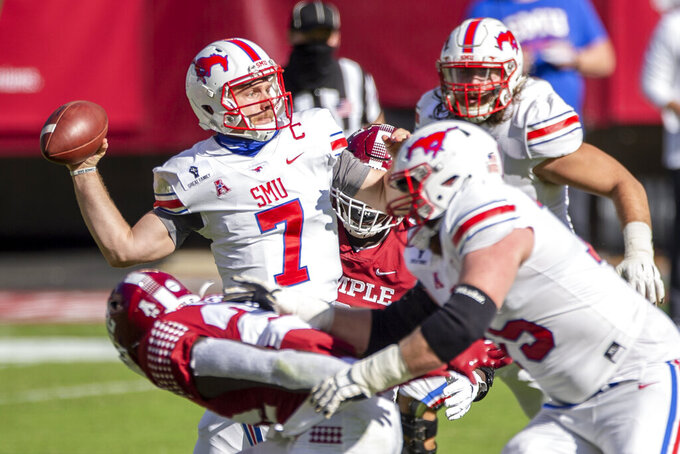 PHILADELPHIA (AP) — Coaches have a variety of ways to motivate their players. With his team trailing at halftime, SMU’s Sonny Dykes threatened to keep the Mustangs in town a little longer than they would have hoped.

Following a sluggish start, No. 18 SMU looked as high powered as ever in the second half, dominating undermanned Temple and breaking away for a 47-23 victory Saturday.

Tyler Page, who caught two of Shane Buechele’s four touchdown passes, said Dykes told the Mustangs that if they didn’t step it up, “he was going to make us have a practice right there on the field after the game.”

“We responded to that and had a much better second half,” Page said.

The game was pushed back from its original Thursday date while Temple dealt with virus-related issues. The Owls were missing 15 players who were in COVID-19 protocol.

SMU led 20-16 before Buechele connected with Kylen Granson on a 24-yard TD pass on the first play of the fourth quarter. The Mustangs (7-1, 4-1 American Athletic Conference) scored four touchdowns in the first 7 1/2 minutes of the period.

Temple (1-4, 1-4) scored on the first play of the game, with wide receiver Randle Jones going 75 yards on a screen pass from Trad Beatty.

Page, who came into the game fifth on the Mustangs this year in yards receiving, caught nine passes for 131 yards.

“That’s a testament to the depth we have and getting guys reps at practice during the year,” Page said. “That’s what makes our offense so dangerous. You can’t defend everybody. Despite our injuries we still have a championship team.”

Playing in the slot most of the game, Page took advantage of a soft middle of the Temple defense and then used his speed to rack up most of his yards after making the catch.

“Sometimes teams will take away the plays on the outside and open up the inside,” Dykes said. “Our guys took advantage of it. Tyler is one of those unsung guys. He was one of our few guys who played well in the first half. He kept us in the game.”

Buechele put SMU ahead for good when he found Page with a 44-yard strike on the first drive of the second half.

In the fourth quarter, Buechele added a 33-yard TD toss to Rashee Rice while Tyler Lavine had a 2-yard touchdown plunge and TaMerik Williams added a 49-yard scoring scamper.

The Owls added a touchdown in the final minute on an 11-yard pass from Re-al Mitchell to tight end Aaron Jarman. It was the first touchdown pass at Temple for Mitchell, a redshirt sophomore who transferred from Iowa State.

SMU: The Mustangs outscored their first seven opponents by a combined margin of 159-89 in the first half. But Temple’s 13-10 edge marked only the second halftime deficit of the season for SMU. The only other time was in the Mustangs’ loss to nationally ranked Cincinnati.

Temple: Found out before the game that it would be without starting linebacker Jordan Magee, who became the 15th player in the COVID-19 protocol. The short-handed Owls were also missing starting quarterback Anthony Russo for the second straight game with a shoulder injury.

After a bounce-back win against Navy kept the Mustangs securely in the Top 25 following the loss to Cincinnati, the Mustangs will look to move up in the rankings following a 24-point victory.

Despite scoring on the first play of the game, Jones was injured on the second Temple drive when he took a huge hit while making a catch. Jones stayed down for awhile before eventually walking off the field. He didn’t play again.

SMU: At Tulsa next Saturday.

Temple: At Central Florida next Saturday.