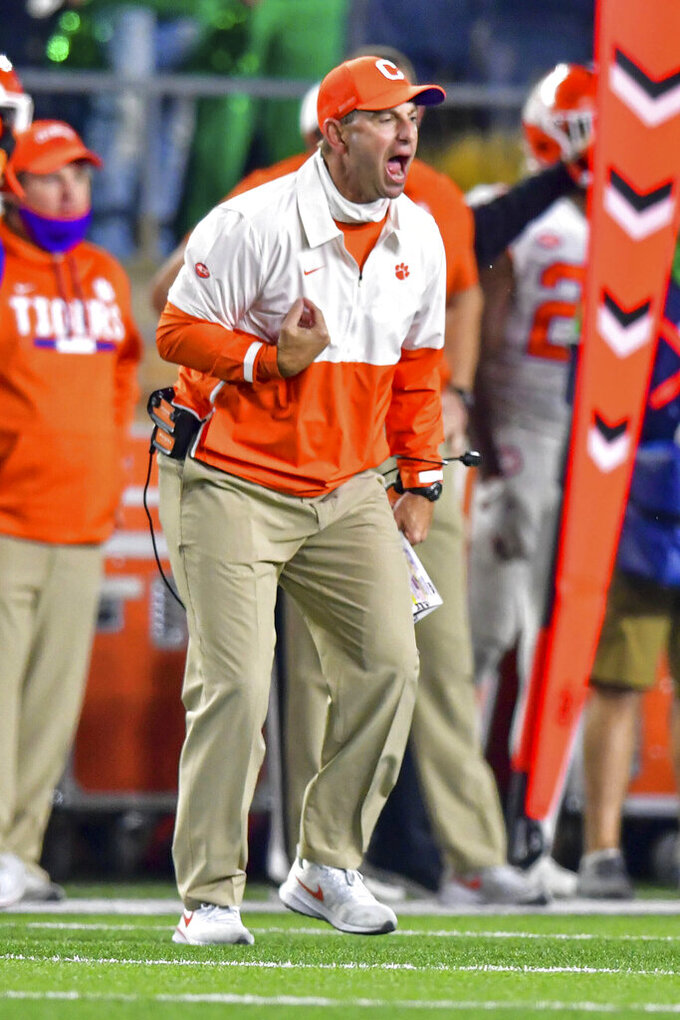 Clemson coach Dabo Swinney remains frustrated about postponing the Tigers game against Florida State, a decision he sees as an insult to his program's credibility.

While the Tigers' players and staff have apparently turned the page, it not quite as easy for Swinney, who touts a “windshield mentality," to let go of how the game was called off.

When asked about the decision again Tuesday, Swinney dug in once more.

It's the latest in the verbal sparring between the the schools.

On Sunday, Swinney said Florida State administrators used COVID-19 as an “excuse” to postpone the game.

The spat started when an unidentified Clemson reserve offensive lineman, who had shown symptoms associated with coronavirus earlier in the week and had tested negative for the illness, had a positive test result on Friday after the team had flown to Tallahassee, Florida for the game.

The Atlantic Coast Conference announced the postponement Saturday morning a few hours before kickoff, saying medical advisors from both could could not agree it was safe to play.

Seminoles coach Mike Norvell weighed in Monday when asked, saying he and his players wanted to play and were as disappointed as the Tigers at the postponement. He said his team's safety was paramount and that the right decision was made in calling things off.

“Football coaches are not doctors, some of us might think that we are,” Norvell said.

“I'm not a doctor, I'm just trying to listen to the doctors,” Swinney said. “Listen, I'm not really worried about what they say down there in Tallahassee, that's for sure. I've been in this league 18 years, head coach here 12. They've had three head coaches in four years.

“I'm not going worry about the advice from Tallahassee,” he continued. “I trust the people here. I trust our doctors, 100%.”

Clemson quarterback Trevor Lawrence, who missed two games after testing positive for COVID-19 last month, was disappointed he couldn't return to the field last week for the first time since Oct. 24.

The quarterback said what Swinney says to reporters and TV networks isn't the message he's sending to the Tigers (7-1, 6-1 ACC). Lawrence said the team's focus is on game-planning to face Pittsburgh (5-4, 4-4 ) on Saturday night.

That shift began shortly after Clemson learned of the postponement. Tigers defensive coordinator Brent Venables had players watching film of the Panthers as the group waited to fly home earlier than expected.

Players understand and appreciate Swinney's view, knowing he simply wants the best for them, Lawrence said.

“Obviously, there's a lot of backlash going on social media right now,” Lawrence said. “As a leader, coach Swinney is great at what he does and we've got his back through thick and thin.”

Athletic director Dan Radakovich has said he'll talk with the ACC about rescheduling the Florida State game. Both teams have Saturday, Dec. 12 off, although nothing has been finalized.

Swinney will try keep the focus on Pitt this week, although he'll probably continue to get asked about Florida State.

“You can't always have a poker face. People have emotions,” Lawrence said. “You can't always say things that aren't actually how you feel, but sound good. I think that's what you're seeing a little bit.”