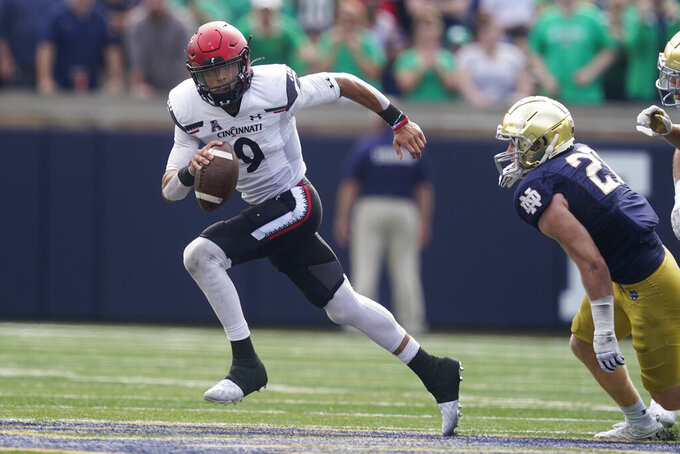 Nobody should be rooting harder for Notre Dame the rest of the season than Cincinnati.

Cincinnati should be a comfortable favorite in most of its remaining games, with only No. 24 SMU currently ranked. Cincinnati's victory against Indiana already looks as if it won't be much to brag about as regression has its way with the Hoosiers in 2021.

If the Bearcats are to make the case to the College Football Playoff selection committee that they can beat the top teams in the country, No. 14 Notre Dame needs to remain one of those.

The Irish bring their struggling offensive line and uncertain quarterback situation to Virginia Tech on Saturday to face a Hokies team that is similarly challenged offensively. The Irish are 101st in the country in yards per play at 5.10. Virginia Tech is 105th at 5.02.

Notre Dame's schedule going forward is best described as tricky — no ranked teams but few pushovers. Given the state of the Irish through five games, anything from 8-4 to 10-2 seems like a reasonable prediction for Notre Dame.

The low end of that curve would hurt Cincinnati as much as it would the Irish.

The picks, with lines provide by FanDuel Sportsbook:

Can the Bearcats avoid a Notre Dame letdown on a short week? Probably ... CINCINNATI 35-14.

Third straight game against a ranked Pac-12 rival for the Cardinal, who lost to UCLA and beat Oregon ... ARIZONA STATE 31-17.

The Aggies are quickly becoming the most disappointing team in the country; Tide has won eight straight meetings since being Manziel'ed in 2012 ... ALABAMA 34-13.

Bulldogs have shut out two straight SEC opponents; last time they had three straight was 1971 ... GEORGIA 24-13.

It is possible that we are now underrating the Sooners, who have won four games by one score? ... OKLAHOMA 31-27.

Cornhuskers might be sneaky good, though they have lost 14 straight against ranked teams dating to 2016 ... NEBRASKA 24-21, UPSET SPECIAL.

Aztecs have won seven straight in the Rocky Long Bowl; the former head coach at New Mexico and San Diego State is back with the Lobos as defensive coordinator ... SAN DIEGO STATE 28-7.

Horned Frogs have lost two straight and could be in for a long year if they can't take care of business in Lubbock ... TCU 31-27.

Utah (plus 3 1/2) at Southern California — @ilikewatchincfb

Knights trying to avoid first three-game losing streak since the end of the 2016 season; ECU is trying to win four straight for the first time since 2014 ... UCF 35-23.