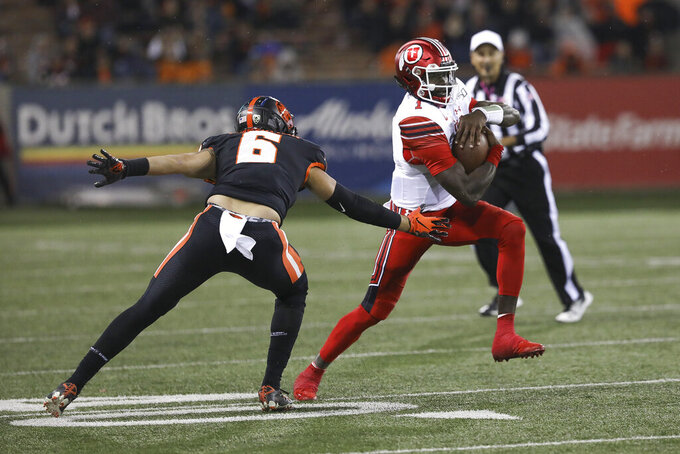 The Pac-12 has slipped into the background of the college football season. Again.

In the College Football playoff era, those are not necessarily good qualities. Being the only Power Five conference without a top-10 team makes it difficult to command the spotlight, but this weekend the Pac-12 has two games with championship implications and maybe even playoff ramifications.

No. 12 Oregon (5-1, 3-0), the only team in the Pac-12 still unbeaten in conference play, faces No. 25 Washington (5-2, 2-2). The Ducks might be the Pac-12's best hope to reach the College Football Playoff. Of more immediate importance, Oregon could build a huge lead in the North by beating the Huskies for the second straight season.

In the Pac-12 South, No. 13 Utah (5-1, 2-1) hosts No. 17 Arizona State (5-1, 2-1) with the winner moving into a tie for first with the winner of Arizona-Southern California. The Utes already have a loss to USC on their resume and another loss will make it tough for the defending South champions to get back to the Pac-12 title game for the second straight season.

Regardless of what happens in Salt Lake City, a Washington victory would leave the Utah-Arizona State winner as the conference's lone one-loss team.

Rematch of last year's Big Ten title game and the first Friday night game for the Buckeyes since 1959 ... OHIO STATE 31-7.

Tide's winning streak over the Vols is 12 games and the gap between the rivals is as big as it has ever been ... ALABAMA 48-14.

QB Joe Burrow has been near flawless, but LSU's running game is rolling, too, behind Clyde Edwards-Helaire, a 5-foot-8 junior averaging 6.3 yards per carry ... LSU 38-23.

Cardinals' turnaround this season has been fueled by a big-play offense; Clemson's defense is a big-play black hole ... CLEMSON 45-17.

Mountaineers might be without QB Austin Kendall, an Oklahoma transfer ... OKLAHOMA 56-20.

You know the tune by now: The Wolverines are 0-7 as an underdog under Jim Harbaugh, including five double-digit losses ... PENN STATE 20-14.

Gamecocks expect to have QB Ryan Hilinski in the starting lineup after a sprained knee against Georgia ... FLORIDA 24-21.

Cougars are piecing it together at QB with Zach Wilson injured; Broncos hope to have QB Hank Bachmeier (hip) ready ... BOISE STATE 28-17.

Longhorns defense has been riddled by injuries and mauled by LSU and Oklahoma; here's an opportunity to get it together ... TEXAS 45-17.

Bears have won four of five against the Cowboys, but that spread says all you need to know ... OKLAHOMA STATE 28-23.

Can the Owls take down a ranked and unbeaten conference opponent two weeks in a row? ... SMU 31-27.

First of four straight games the Bearcats are likely to be double-digits favorites ... CINCINNATI 28-14.

Commodores trying to stop a freefall after losing to UNLV at home ... MIZZOU 42-14.

In three games against Power Five teams not named Rutgers, the Hawkeyes have scored two touchdowns and 33 points ... IOWA 24-14.

Louisiana-Monroe (plus 14½) at No. 24 Appalachian State

Tulane (plus 4) at Memphis — @jimlaise

Texas A&M (minus 6½) at Mississippi — @DarrylKerr

Aggies appear to be better suited to this weight class after three losses to ranked teams ... TEXAS A&M 31-21.