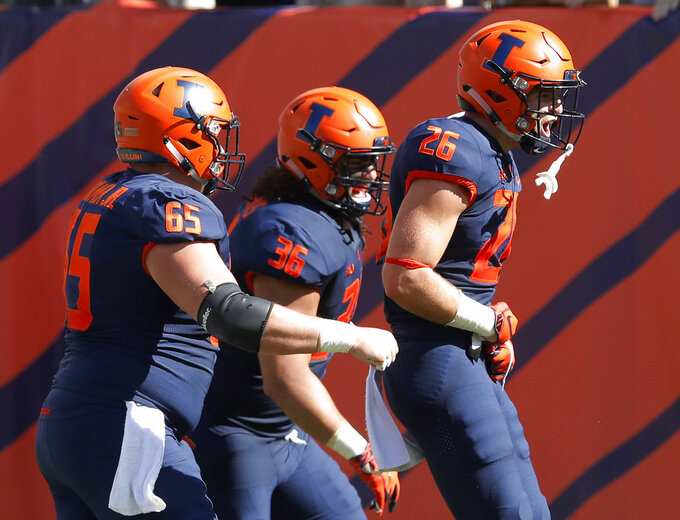 CHAMPAIGN, Ill. (AP) — First-year offensive coordinator Rod Smith's up-tempo, spread offense has created some big opportunities for Illinois, which has contributed to a solid 2-1 record going into Friday's conference opener at home against No. 10 Penn State.

No one has benefited more from Smith's complex system than sophomore running back Mike Epstein.

Epstein, a 6-foot, 200-pounder from Fort Lauderdale, Florida, suffered a fractured foot in game five last year and missed the remainder of the season. He's bounced back to become the team's most effective playmaker thus far this season.

A power back known more for an aggressive straight-ahead running style rather than explosive speed, Epstein is the first Illini to rush for 100 yards or more in back-to-back games since 2013.

With starting quarterback AJ Bush out with a hamstring injury_he remains questionable for the game against the Nittany Lions — Epstein has been a consistent bright spot in Rod Smith's offense so far this year. In three games, Epstein has rushed for 251 yards with two touchdowns, 113 of those yards and one touchdown came in Saturday's 25-19 loss to South Florida.

Many feel he stands a good chance of reaching 1,000 rushing yards, something Illinois hasn't seen since Mikel Leshoure in 2010.

It's not an unreasonable goal, provided Epstein stays healthy.

Last season, he gained 346 yards in just five games and was the leading rusher on the team for the entire 12-game season.

"Mike is coming back from an injury, and we have three running backs that we like," coach Lovie Smith said. "All the guys feel like they have an opportunity to help their team win. In the end though, you go with the guy who gives you the best chance to have success. Mike the last couple weeks has really stepped up his game."

So far, Epstein has shown no lingering effects from last season's foot injury.

"I'm feeling really good, definitely grateful every time I step onto the field," Epstein said. "I'm just grateful to be healthy and able to help the team."

Epstein has been the featured back in a three-back system that also includes Reggie Corbin and Ra'Von Bonner. The Illini's spread offense, which uses up to four wide receivers at any given time, has done wonders for the running game.

"I think our offense is definitely trying for defenses, the way (Rod Smith) spreads out the passing lanes to open up the run. It's pretty creative," Epstein said. "He creates a lot of mismatches on defense for the other teams. It's certainly more up tempo, and I think we've shown that so far."

One aspect of the spread offense has been to use Epstein more often as a receiver.

"I love it, either coming out of the backfield or lining up in the slot," Epstein said. "Any way I can get the ball to help the team is great. Any approach works for me."

"Mike's a good football player, whether it's catching the ball — he had a couple good catches in (Saturday's) game — and of course running the ball," Lovie Smith said. "We'll continue to lean on him. That game just dictated that we do it that way. You get to a point where you go with the guy that gives you the best chance to have success."

"Preparing for a team like Penn State is really no different than preparing for anyone else," he said. "I mean, they are a top 10 or 11 team, sure, and they have some great players. But our schemes are set and won't change, no matter who we play. It's just another game and that's how we're preparing."