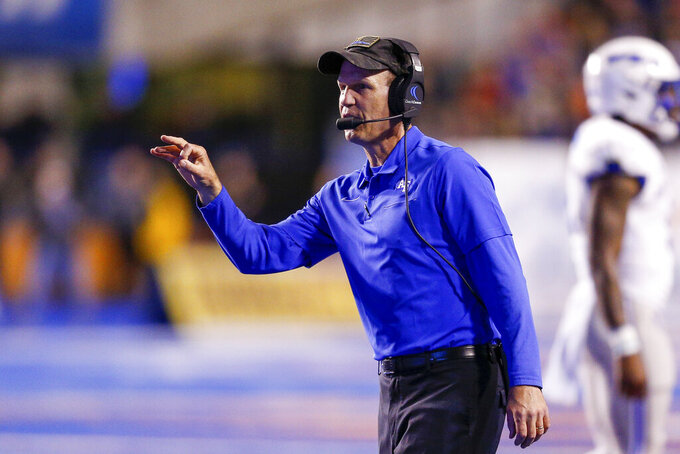 FILE - Air Force head coach Troy Calhoun gestures during the first half of an NCAA college football game against Boise State in Boise, Idaho, in this Friday, Sept. 20, 2019, file photo. The Air Force Falcons are picked to finish third in their division of the Mountain West in a preseason poll. (AP Photo/Steve Conner, File)

While rehabbing from shoulder surgery, Jackson returned home and took a side job with the food delivery platform Uber Eats. He was one of 35 or so Falcons players granted an administrative turnback, which allows cadets to take up to two semesters away from the academy.

With Jackson among those returning to the mix, the Falcons may resemble the 2019 squad — 11-2 mark, bowl win, top-25 ranking — more than the version that finished 3-3 in a 2020 season shortened by the coronavirus. The team also had two games canceled in '20 and fell to Army in the season finale to lose out on hoisting the coveted Commander-In-Chief’s Trophy.

“It was tough,” Jackson said in an interview produced by Air Force's “Falcon Vision” about watching from home as his teammates took the field in '20. “Growing up always playing football, not somebody who usually is able to sit out.”

In the Mountain West preseason poll, the Falcons were predicted to finish third in their division. That may be due to the fact they’re a relative unknown given all the players returning.

Air Force has experience at QB in Haaziq Daniels, who started every game in 2020 and finished second on the team in rushing with 297 yards. He also threw for 433 yards and three TDs.

Defensive back Milton Bugg III and linebacker Lakota Wills return from taking a turnback to lead what could be a stalwart defense. In 2019, Bugg finished with three interceptions. His brother, Mason, also is on the team as a free safety.

The key will be quickly restoring the chemistry. This was a defense that in '19 allowed a program-low 100.5 yards rushing per game.

“You’re just trying to get some things to work together,” coach Troy Calhoun said.

For Jackson, it was a difficult assignment being away from teammates. He was coming off a '19 season where he recorded 38 total tackles, 4 1/2 tackles for loss and 3 1/2 sacks. The time off allowed him to heal his shoulder — and earn a little extra money by delivering food.

“It’s definitely different going to a full-time job,” he said.

What he learned through the experience was simple: "Definitely to cherish what delivery people do,” Jackson said. "Definitely a tougher job than most people expect.”

TOP OF THE LINE

The Falcons are looking to replace offensive linemen Parker Ferguson and Nolan Laufenberg, who both signed NFL deals (Ferguson with the New York Jets and Laufenberg with the Denver Broncos). Both were named to the first-team, All-Mountain West squad last season. Air Force lost its top six offensive linemen from a year ago and have only three players who’ve started a game.

At 5-foot-11 and 205 pounds, Roberts will play mostly in the fullback spot in Air Force's version of the triple-option offense. But don't be surprised to see him line up as a tailback as well.

The Falcons don’t throw it often, but when they do tight end Kyle Patterson seems to be the likely target.

Patterson had a team-leading 12 catches for 205 yards last season, becoming the first tight end to lead the team in receiving since Adam Strecker in 2002 (14-261). Patterson made his first career catch in the season opener against Navy, which was good for a 12-yard gain.

NFL scouts are already asking Calhoun all about Wills, the hard-working outside linebacker who’s been plagued by injuries over his career.

“It’s been one of most rewarding things truly since I've been in coaching, seeing the growth he’s made as a young man,” Calhoun said.

Air Force opens at home against Lafayette on Sept. 4. The following week the Falcons travel to Annapolis, Maryland, to face Navy for the first leg of the Commander-In-Chief’s Trophy race. They play Army in Arlington, Texas, on Nov. 6.