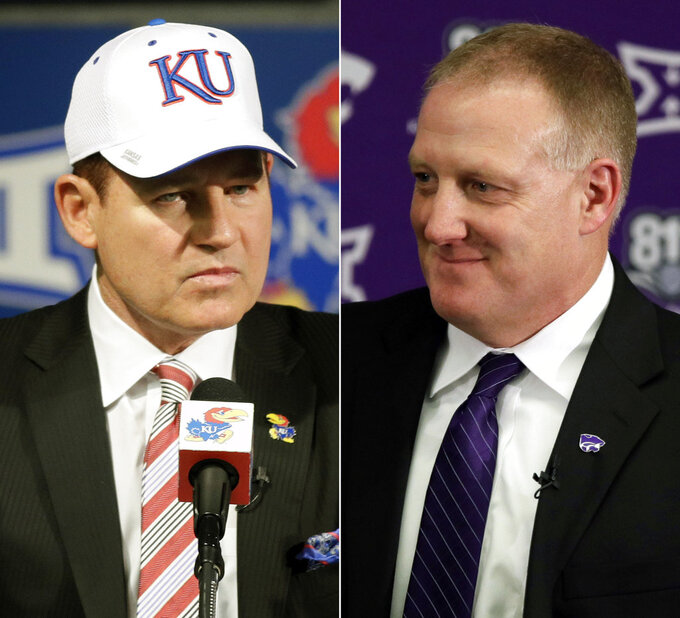 FILE - At left, in a Nov. 18, 2018, file photo, University of Kansas new football coach Les Miles makes a statement during a news conference in Lawrence, Kan. At right, in a Dec. 12, 2018, file photo, Chris Klieman is introduced as the 35th Kansas State NCAA college football head coach, in Manhattan, Kan. Kansas and Kansas State both have new head coaches, and as Les Miles and Chris Klieman put the finishing touches on whirlwind recruiting classes, it is already clear that they will be butting heads for top recruits. (AP Photo/Orlin Wagner, File)

MANHATTAN, Kan. (AP) — The first head-to-head showdown between Kansas coach Les Miles and Kansas State counterpart Chris Klieman was waged not on a football field but in classrooms and living rooms.

Give this one to the Wildcats.

During a packed news conference at Free State High School in Lawrence, not far from where Miles will lead the Jayhawks next season, Jax Dineen and teammate Keenan Garber pledged their services to Kansas State. Dineen will play fullback and Garber, one of the top prospects in the state, will play wide receiver when Klieman begins his first season this fall.

"Make no mistake," Klieman said, "we need to win the states of Kansas and Missouri. We need to win Kansas City metro guys, and I believe that's something I can bring to the table."

The first day prospects could sign national letters of intent during the early signing period was Wednesday, and all eyes in the Sunflower State were trained squarely on the Free State duo.

Garber had been committed to Kansas State when Bill Snyder was still the coach, and Dineen was trying to decide whether a scholarship offer from the Wildcats — coupled with an offense more suited to his abilities — was more important to him than playing at Kansas, a school with deep family ties.

Garber and Dineen were also close friends, and most viewed them as a package deal. And when Kansas hired Miles to replace the fired David Beaty before the season had even ended, it gave him a head start in trying to keep two talented prospects in town.

Klieman was hired just over a week ago, and only had a couple of days of recruiting while trying to lead North Dakota State to a fourth FCS championship in five seasons. But Klieman knew how crucial landing Garber and Dineen would be for his initial recruiting class, so he joined a couple assistants from the previous staff in making critical in-home visits with them last weekend.

Klieman and his recruiting coordinator, Taylor Braet, were still uncertain of their intentions until this week, when Dineen and Garber sent in their signed letters of intent.

"''I was going crazy over that one," Braet said with a smile. "You go back to where you win at, you win in Lawrence, and that's where you go take those kids out of and they're coming here, that says a lot. I could go into more detail but I probably shouldn't."

Kansas State wound up signing 15 players in its initial class, including five from Kansas and a quarterback prospect from Missouri, making good on Klieman's promise to recruit strong locally.

The Wildcats also flipped three-star cornerback William Jones II from a commitment to California this week, and lured Ball State running back James Gilbert and New Mexico cornerback Marcus Hayes as a pair of transfers at positions of crucial need.

Klieman was helped by offensive coordinator Collin Klein and defensive coordinator Blake Seiler, both of whom of whom he indicated would be on his staff. It's unclear whether they will be in the same roles, but Klein and Seiler are both beloved former players familiar with the program.

Both said they expect more head-to-head matchups with Kansas on the recruiting trail.

The schools operated vastly different systems for years, and their coaching staffs went about the job of recruiting in much different ways, so the showdown that transpired for pledges from Dineen and Garber was a rarity. But it could be much more common going forward, particular as Miles and Klieman try to build programs in a state that produces a relatively modest amount of talent.

"We want to recruit first and foremost in the 500-mile footprint," Miles said. "There are some really talented guys right here in Kansas and they want to stay home. This is a great education. This is the place where the number one basketball team is playing. Athletics happen here. Quality academics happen here. It is an easy place to want to represent."

The Jayhawks landed a pair of in-state prospects in tight end Mason Fairchild from Andale and safety Jayden Russell from the Kansas City area. They also dipped into the junior colleges to secure their quarterback of the future, Thomas MacVittie, among the 10 prospects signed on Wednesday.

Klieman and Miles both admitted there is plenty to do before the late signing period in February, but they also were predictably upbeat about securing classes in a condensed timeframe.

"We assembled needs," Miles said of his staff, "and I am really proud of how they have done and all of the hard work they have put in. They have done a great job of assembling a small class, but one that is talented and addresses some very specific needs."