The Latest: Falcons and MLS Atlanta United to have some fans 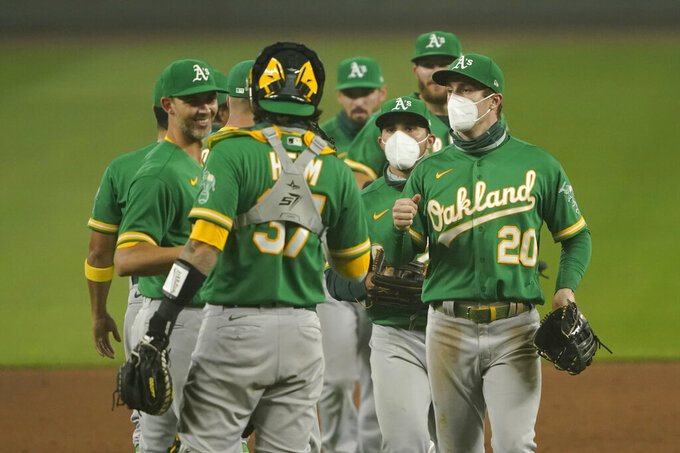 The NFL's Atlanta Falcons and MLS Atlanta United will have some fans at home games in Mercedes-Benz Stadium, beginning with the Falcons’ home game against the Carolina Panthers on Oct. 11.

Team and stadium officials announced the decision to allow a limited number of fans, based on the recent decline in COVID-19 cases in Georgia, among other factors.

The teams will continue to collaborate with local and national health officials and say they reserve the right to go back to playing without fans should conditions in the pandemic change.

The teams announced last month they would play home games without fans through September. The decision affected two Falcons home games, including this Sunday’s game against Chicago. To test stadium operations and protocols, the Falcons will allow about 500 friends, family and associates to attend Sunday’s game.

They were informed of the positive tests ahead of Tuesday’s League Cup game against Hull and left the east London stadium.

West Ham says the trio are asymptomatic and will now self-isolate in line with government rules.

The Southeastern Conference says it is providing its 14 schools wearable technology for football players intended to aid with COVID-19 contact tracing.

The SafeTags made by Kinexon can be worn like a wristband at team facilities or attached to equipment when used in games or practice. The conference says the devices already are being used by the NFL.

The SafeTags allow medical and athletic training staff to track how close those wearing the devices have been to each other and for how long. Current CDC guidelines, which are being used by the NCAA and Power Five conference schools, say a person who was within 6 feet for at least 15 minutes of a person who has tested positive for the coronavirus is considered to be at risk and must quarantine for 14 days.

Contact tracing and determining what is a high-risk contact is vital for stopping the spread of the virus and one of the most challenging aspects of trying to stage a football season for college programs. Several teams already have had to postpone games because of players being quarantined due to contact tracing.

The club says Giménez was the only player infected after the squad underwent tests on Monday.

Atlético says Giménez was isolated at home and the club was following all COVID-19 protocols.

Players will practice individually in the team’s next training session. The morning session had already been canceled because the club had not received all test results in time.

Atlético will make its Spanish league debut on Sunday against Granada at the Wanda Metropolitano Stadium.

The British government has put on hold plans to allow the phased return of spectators into sporting venues in England from Oct. 1 because of a rise in coronavirus cases.

Pilot test events have been held across sports venues with capacity restricted at 1,000. The government hoped stadiums would be allowed to welcome more fans from the start of next month.

Senior medical officers have recommended Britain’s COVID-19 alert level be moved from three to four, meaning transmission is “high or rising exponentially," and one below lockdown.

Conservative lawmaker Michael Gove says the government will “pause” the plan of a phased return of spectators because “we need to be cautious at the moment.”

Five players have been withdrawn from the European Masters snooker tournament as a result of positive tests for the coronavirus.

Daniel Wells and Gary Wilson were positive after arriving at the venue in Milton Keynes, England. Three players who came into contact with either of the pair -- Elliot Slessor, David Lilley and Michael White -- were also withdrawn from the event.

All five must self-isolate.

All players and officials have been tested at snooker events since the sport resumed in June with spectators after the coronavirus outbreak. The European Masters is the first ranking event of the season.