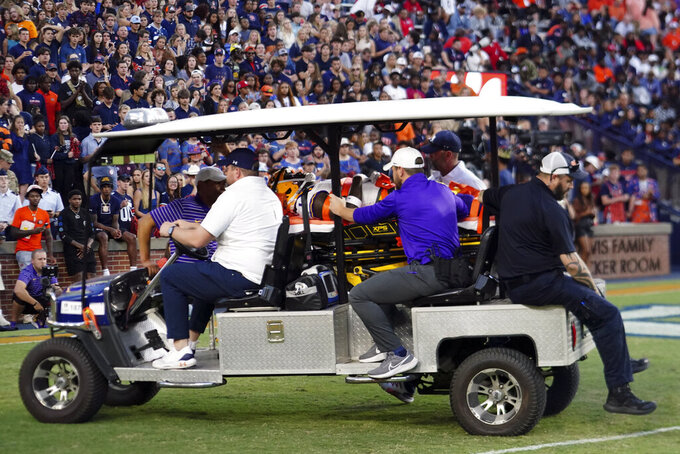 LSU's Sevyn Banks is transported to a waiting ambulance after he was injured on the opening kickoff in the first half of an NCAA college football game against Auburn, Saturday, Oct. 1, 2022, in Auburn, Ala. (AP Photo/John Bazemore)

AUBURN, Ala. (AP) — LSU defensive back Sevyn Banks was injured on the opening kickoff against Auburn on Saturday night and taken to a local hospital for tests.

Banks was strapped onto a stretcher and carted off the field after the entire team came onto the field in support. Auburn's Wesley Steiner immediately signaled to the LSU sideline after the play with Banks lying on the ground.

Banks underwent tests at East Alabama Medical Center and “was alert and mobile”, according to an announcement from LSU posted on Twitter. He was cleared to return to the stadium under the care of team doctors, LSU said.

Banks was called for targeting on the play.

Banks is a graduate transfer who played in 36 games for Ohio State, starting 14 of them. Banks had only played in one game for LSU, making four tackles against New Mexico.