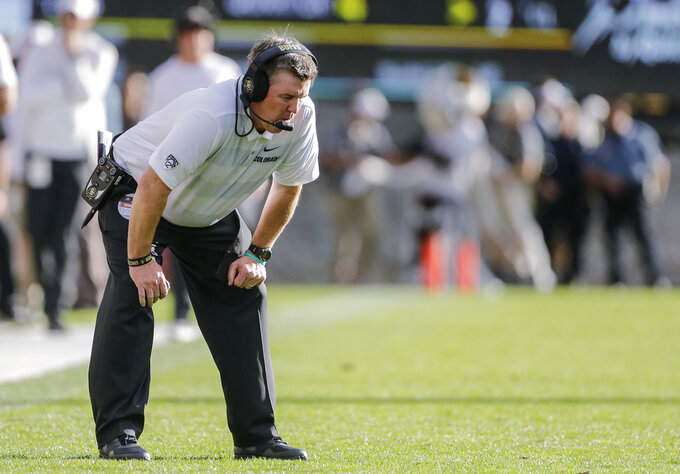 FILE - In this Saturday, Oct. 27, 2018, file photo, Colorado head coach Mike MacIntyre reacts during the second half of an NCAA college football game against Oregon State, in Boulder, Colo. Off to a 5-0 start and ranked in the polls, Colorado has lost three straight games including blowing a double-digit lead to Oregon State last Saturday. (AP Photo/Jack Dempsey, File)

BOULDER, Colo. (AP) — Colorado coach Mike MacIntyre carried a framed picture under his arm as he entered the room.

His art work: A buffalo walking into a storm.

His message: That's the way his team feels at the moment. The Buffaloes have dropped five straight after a 5-0 start. They've been besieged by injuries. And now there's a swirling report that MacIntyre's job is in question at the end of the season.

"There's a little bit of storm here the last few weeks and we've lost some close games," MacIntyre said Tuesday as he displayed the picture that usually adorns his office wall. "We talked to them about life and what that means and walking into (the storm) together. They understood."

Asked if the current skid could cost him his job, MacIntyre responded: "I don't think my job is in jeopardy. But you have to win games."

On Tuesday afternoon, athletic director Rick George issued a statement about speculation over MacIntyre's tenure with the team.

"We do not comment on speculation or unsubstantiated rumors with anonymous sources," George said. "Let me just say I have made no decisions regarding the future of our football program."

MacIntyre said he met with George two weeks ago and was given a vote of confidence.

"He gave me 100 percent support," MacIntyre said. "I've seen him multiple times since then, never said a word to me about anything to this effect. There's always going to be chatter."

MacIntyre discussed the rumors with his team before practice — and then went out and went to work in the cool conditions, with snow piles pushed to the side.

On Saturday, the forecast is calling for possible snow as the Buffaloes play their 500th game at Folsom Field.

For a handful of seniors, it will be their final time to run out behind Ralphie in Boulder.

"What we're worried about is playing Utah this weekend and hopefully playing our best football of the season and having the seniors go out with a bang in their last home game," said standout receiver Laviska Shenault Jr., who returned from a toe injury last weekend in a 31-7 loss to Washington State. "We're trying to get bowl eligible. That's the only thing we're worried about."

The banged-up Buffaloes will be without a handful of starters, including safety Evan Worthington and cornerback Delrick Abrams. MacIntyre pointed out their injury epidemic has been an issue all season, even costing Shenault a few games.

"Let's face it: Look at the Cleveland Cavaliers without LeBron James. Players matter," MacIntyre said. "But we had a lot of kids that have played now and played well. Hopefully, we'll have a different result Saturday."

MacIntyre has gone 30-43 since being hired in December 2012 to turn around a lackluster Colorado program. He led the Buffaloes to the Pac-12 South title in 2016 and was named The Associated Press coach of the year.

After jumping out to a solid start this season, even appearing in the rankings, the Buffaloes have lost five in a row. The most eye-opening: Colorado blew a 28-point lead in the third quarter to a struggling Oregon State team that ended up winning in overtime.

"When I came here a few years ago, this was the worst power football program, a laughingstock of college football," said MacIntyre, whose contract runs through the 2021 season. "The gold helmet is not tarnished anymore. I've gotten so many emails today and so many texts about how proud they are of what we do."

Despite the recent skid, MacIntyre's team remains focused. Quarterback Steven Montez said Tuesday's practice has been the "best energy we've had all season. The guys' went out there and they had a chip on their shoulder."

They're ignoring all the outside noise.

"This is great to teach life lessons to young people," MacIntyre said. "They're going to face a lot of hard times in life, too. Hopefully this is a little microcosm of that. Hopefully, we come out on the other side of it in good shape."