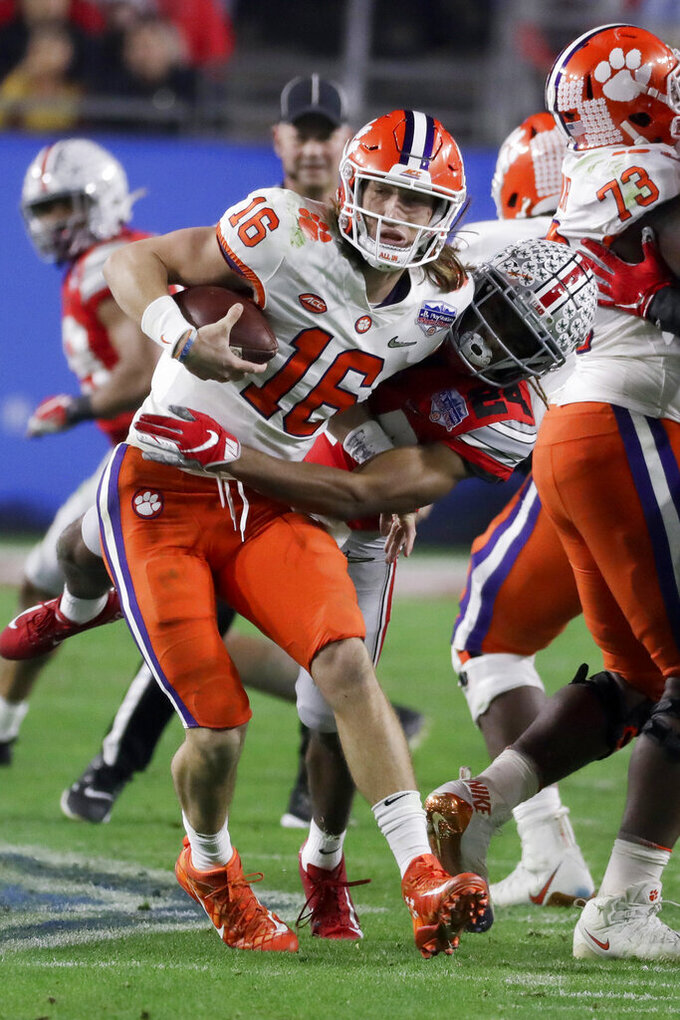 FILE - In this Dec. 28, 2019, file photo, Ohio State cornerback Shaun Wade, right, tackles Clemson quarterback Trevor Lawrence during the first half of the Fiesta Bowl NCAA college football playoff semifinal in Glendale, Ariz. Wade was ejected from the game for targeting. Players ejected from games for targeting will be allowed to remain in the bench area and replay reviews will be limited to two minutes if proposals by the NCAA football rules committee are passed. (AP Photo/Rick Scuteri, File)

Players ejected from games for targeting will be allowed to remain in the bench area and replay reviews will be limited to two minutes if proposals by the NCAA football rules committee are passed.

The committee wrapped up several days of meetings in Indianapolis on Friday by issuing its recommendations.

In an effort to crack down on pregame dust-ups between teams, the committee also recommended officials be on the field 90 minutes before a game begins — instead of the current 60 minutes.

NCAA coordinator of officials Steve Shaw said there was a “robust” discussion about what he called the growing trend of defensive players flopping or seemingly faking injuries as a way to slow down offenses trying to run plays quickly. For now, rulemakers will appeal to coaches to clean up an issue that is difficult to legislate away.

Proposals must be approved by the NCAA playing rules oversight panel, which is scheduled to discuss changes April 16. New rules would go into effect for the upcoming season.

Adjustments were made last year to the replay review process for targeting in an effort to have fewer marginal fouls called. Shaw said feedback was good and no further adjustments were made to a rule that often draws complaints from players, coaches and fans.

The only potential change to targeting could come after the ejection. Players have been required to leave the field after being ejected, usually escorted off by a coach or staffer in full view of fans. If the proposal passes, ejected players will be allowed to stay on the sideline with teammates, eliminating the so-called walk of shame.

Shaw said the two-minute limit for replay reviews is aimed at efficiency and trying to manage the length of games. He said there was an average of 2.2 replays per game at the FBS level.

“If you're at two minutes and you don't know the answer, it's time to let it stand and not drag the process out,” Shaw said.

“It’s a bad look for our game,” said Stanford coach David Shaw, the chairman of the rules committee. “Some of these pregame shenanigans that have gone on, we want to curb some of those.”

The committee also recommended no more than two players on a team can wear the same jersey number. Rules already require players wearing the same number play different positions and can not be on the field at the same time. The committee proposed zero being added as a legal jersey number.

In regards to flopping, no one wants game officials to be required to determine the validity and severity of a player's potential injury.

The committee discussed requiring players who come out of the game after an injury timeout to sit out more than the one play that is currently required, possibly four plays or the rest of an offensive possession. But that could encourage players to try to play through legitimate injuries, Steve Shaw said.

“We didn’t want to incent a guy if he's injured not to come out,” Steve Shaw said.

Steve Shaw said the plan is to ask coaches to police themselves in regards to coaching players to fake injuries. If it persists, the committee will re-address it next year and could be forced to crack down.

David Shaw said the word will be spread through the American Football Coaches Association and he hopes coaches will hold each other accountable. The committee will also ask conferences to monitor.