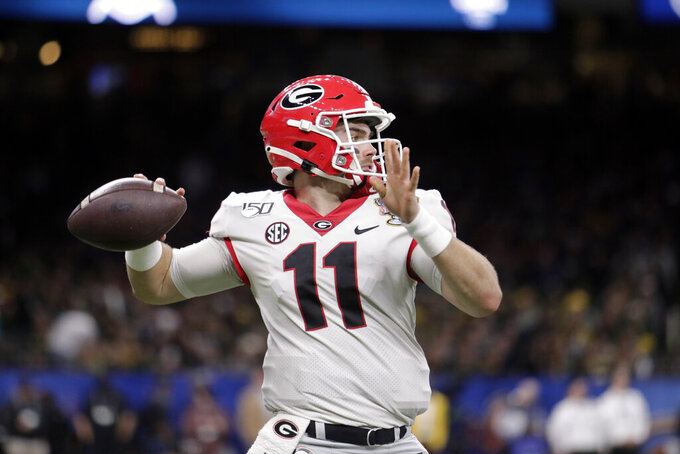 ATLANTA (AP) — Georgia quarterback Jake Fromm is heading to the NFL, despite some struggles during a junior season that led to speculation he might return for one more year with the Bulldogs.

Fromm announced his decision Wednesday in a statement on his Twitter page, one week after leading the Bulldogs to a 26-14 victory over Baylor in the Sugar Bowl.

"This decision and process has been unbelievably difficult," he wrote. “But through much prayer and counsel, I have decided that it is time for me to take on the next challenge in my life and pursue my lifelong dream of playing in the NFL.”

Fromm threw for a career-high 2,860 yards this season, with 24 touchdowns and just five interceptions. But he posted the lowest completion percentage (60.8) and quarterback rating (141.2) of his college career, leading to him dropping in many NFL draft projections.

Late in the season, he had a stretch of five straight games where he failed to complete 50% of his passes. Once viewed as a potential top 10 pick, some analysts are now predicting that Fromm will fall into the second round.

Still, Fromm will be remembered as one of the best quarterbacks in Georgia history. He was 35-7 record as the Bulldogs' starter, including three straight appearances in the Southeastern Conference championship game.

As a freshman in 2017, he took over in the season opener after Jacob Eason was injured, made his first college start at Notre Dame the following week and held the job for the rest of his career.

Fromm sparked Georgia to its first SEC title since 2005, a memorable Rose Bowl victory over Oklahoma in the playoff semifinals, and a trip to the national championship game, where the Bulldogs lost to Alabama in overtime.

The past two seasons, Georgia settled for Sugar Bowl bids after losing to Alabama and LSU in the SEC championship game.

"Thank you to Coach Smart who always believed in me and who over the last three years has helped grow that wide eyed, scared, 18 year old kid who got handed the ball in South Bend, into a better man, and secondly a better football player," Fromm said.

"Through the good times and the bad, I always felt your love and support," he wrote. "I hope I mean as much to you as you do to me."

The loss of Fromm leaves Georgia with a big hole to fill at quarterback. Former walk-on Stetson Bennett is the only other signal-caller with significant college experience, playing four games in a mop-up role this season.

The Bulldogs also have a pair of top prospects from their last two signing classes.

D'wan Mathis enrolled at Georgia a year ago but suffered a major setback when severe headaches and sinus pressure led to him undergoing surgery in May to remove a cyst from his brain. He recovered from the operation and was able to work on the scout team late in the season.

Last month, the Bulldogs signed Carson Beck, a 6-foot-4, 226-pound quarterback from Jacksonville, Florida whose skills have been compared to Fromm's.

Justin Fields was once Fromm's heir apparent, signing with Georgia ahead of the 2018 season.

But Fields played sparingly as a freshman and wound up transferring to Ohio State, where he finished third in the Heisman Trophy balloting while leading the Buckeyes to a Big Ten championship and berth in the College Football Playoff.

Fields put up numbers that dwarfed Fromm's, throwing for 3,273 yards and 41 touchdowns, with three picks. He also rushed for rushed for 484 yards and 10 TDs, leading many to question Smart's decision to stick with Fromm as the starter.