No. 11 Oregon hopes to rebound against rival Oregon State 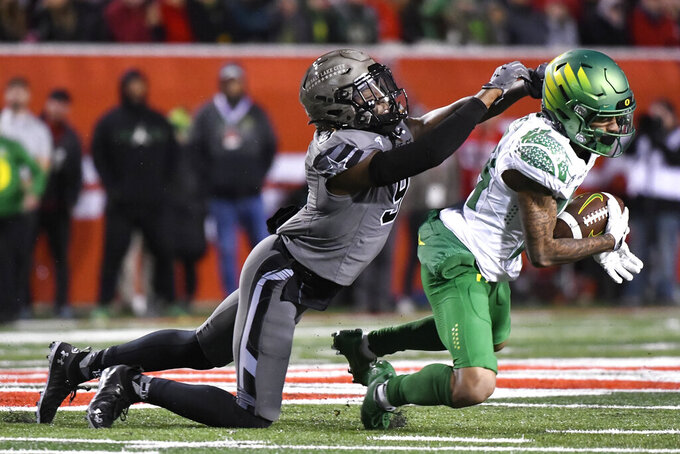 While wounded, No. 11 Oregon can still play for another Pac-12 championship and a Rose Bowl berth.

Oregon is coming off a 38-7 loss last Saturday at Utah, which dropped the Ducks from No. 3 in the College Football Playoff rankings to No. 11 — meaning they won't be playing for a national title.

Oregon can still earn a spot in the Pac-12 championship game by beating the rival Beavers (7-4, 5-3) Saturday. Win the league title in Las Vegas, and the Ducks will head to Pasadena.

There was a chance the Beavers could win the Pac-12 North title and a championship berth, but they needed Washington to win the Apple Cup on Friday night as well as a victory over the Ducks.

Instead, the Cougars beat the Huskies 40-13. Should Oregon State beat the Ducks, then Washington State would win the North and Oregon's season would be done.

“Rivalry games, they always carry a little bit extra, right?” Oregon coach Mario Cristobal said. “I think anyone’s that played the game or has coached the game knows that it becomes something that doesn’t even need to be brought up because it’s already up. (You’ve) got to make sure you hone in and focus in the things that are going to allow you to execute at a high level, perform at a high level: technique, fundamentals, your discipline, eye discipline, physical discipline, gap integrity, playing with physicality, all those things. Rivalry games always bring out the most intensity in everybody, players, fans, university communities, all that stuff. That’s what makes college football great.”

Meanwhile, Utah clinched the Pac-12 South last week with the victory over the Ducks.

The Beavers have become bowl eligible for the first time since 2013. They haven't won as many as seven games since 2011.

“We want to be playing in meaningful games, and we’ve set the stage for that," fourth-year Beavers coach Jonathan Smith said.

Oregon is looking to reach the Pac-12 title game for the third straight year, and the fifth time overall.

Oregon's loss to Utah was one of those you don't just move on from, Cristobal said.

“I think if you don’t assess it, analyze it and take it right between the eyes, I think if you don’t do that it can happen to you again. We’re very honest with ourselves obviously from a coaching, planning, playing, just an organization,” Cristobal said. “Obviously it’s not good. It’s not what we’re used to. It’s not at our standard. Learn from it and go forward and attack it."

Running back Travis Dye is playing in his fourth season for the Ducks and would therefore be headed off to the NFL Draft, but the coronavirus-shortened season granted the running back an extra year of eligibility.

He was leaning this week toward not taking part in the senior game festivities. He cautioned reporters not to read too much into his decision because he hasn't decided about his plans for next year.

Dye needs 63 yards rushing on Saturday to reach 1,000 this season.

Oregon State running back B.J. Baylor ranks atop the Pac-12 and is No. 10 in the nation with an average of 109.1 yards rushing per game.

He has six games with at least 100 yards and last week against Arizona State he ran for 150.

It is the 125th anniversary of the rivalry game between the two Oregon schools. The game was called the Civil War up until last year, when both schools decided to drop the moniker because of its association with a war over slavery.

Oregon leads the all-time series 66-48-10, but the Beavers won last year’s game in Corvallis 41-38. The Ducks haven't lost to Oregon State at Autzen Stadium since 2007.

The Ducks are 6-0 at home this season, averaging 39 points per game. That's the best average in the league. Oregon is also holding opponents to an average of just 20 points at home.