No. 15 Oklahoma State ready to bounce back against Kansas 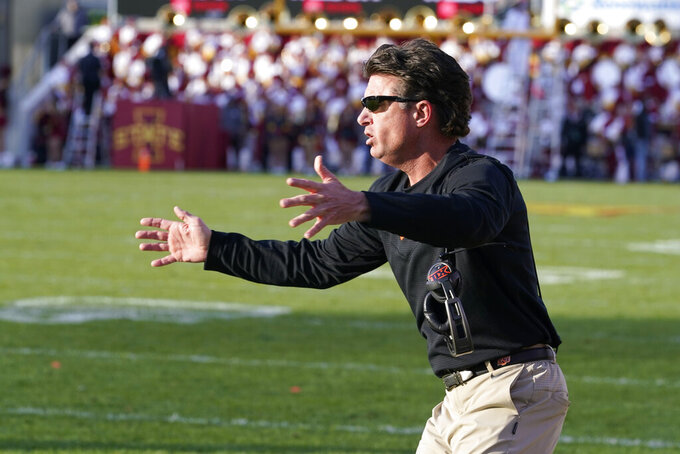 STILLWATER, Okla. (AP) — One play here or there could have made a difference for No. 15 Oklahoma State in its 24-21 loss to Iowa State last week, the first defeat of the season. The Cowboys want to be sure they don’t overlook a pesky Kansas squad that nearly pulled off a monumental upset of No. 4 Oklahoma.

The key for Oklahoma State (6-1, 3-1 Big 12) is to not look past the perpetually cellar-dwelling Jayhawks when the teams meet up on Saturday night (7 p.m., FS1), following OSU’s big homecoming celebration.

“We’re not far enough along to overlook anybody,” said Cowboys coach Mike Gundy, whose team averages 25.7 points. “I expect this to be a fourth-quarter game. When you have an offensive capability to score 45 or 50 points, then there are times that you can say, ‘Well, maybe we’ll overlook somebody.’ But we’re not in a position right now, based on a variety of things, to overlook anybody, because we don’t score as many points as we have the years past.”

For Kansas (1-6, 0-4), which had lost each of its previous five games by at least 19 points before putting a scare into Oklahoma last week, it’s about building some momentum from a strong performance.

However, KU’s first-year coach Lance Leipold, whose squad led 10-0 at halftime and 17-7 late in the third quarter before the Sooners rallied to win it 35-23, doesn’t want to get too excited over last week.

“You hope it’s a building block, but we lost the game, you can’t lose sight of that,” Leipold said. “I want to acknowledge the positive, but what could have been, too. Even though we lost, it’s still, we lost six straight. But yet (now), you got a little more confidence, and a little more enthusiasm, because they start seeing results.”

Five things to watch for Saturday:

One difference in the game against Iowa State last week might have been the two field goal attempts missed by Oklahoma State kicker Tanner Brown, one from 50 yards early in the second quarter and from 32 late in the third with the game tied 14-14. Brown, a senior transfer from UNLV, took over the place-kicking duties in OSU’s fifth game of the season after incumbent kicker Alex Hale went 2-for-5 in the first four contests. “Tanner, if he had a chance to have that field goal over again, he would have made it,” Gundy said of last week’s third quarter attempt. “We missed a field goal and they converted theirs.”

The Kansas defense has forced at least one fumble in every game this season, ranking 10th in the nation in forced fumbles per game at 1.29. “Super senior” defensive end Kyron Johnson, junior safety Kenny Logan Jr. and freshman cornerback Ra’Mello Dotson have each forced two fumbles this season. Logan leads the Jayhawks with 59 tackles, including a career-high 14 last week against Oklahoma, and is third in the Big 12 with 8.4 tackles per game. He also has one interception, one fumble recovery and five passes defended this season.

Traditionally known more for its offense, Oklahoma State’s defense has been instrumental to its success this season, ranking 19th in the nation (and second in the Big 12) in total defense (316.7 yards per game, their lowest total since 1999), while topping the Big 12 and sitting 12th in both rushing defense (94.3 yards per game, the school’s lowest total since at least 1940) and third-down conversion defense (.304). Overall, the Cowboys have allowed 20.1 points per game, 31st in the country and their lowest figure since 1997.

The Kansas offensive line has improved significantly over the course of the season, allowing just two sacks in their last five contests, including just one to Oklahoma last week, after surrendering nine against the Sooners in their 2020 meeting. Overall, the Jayhawks have surrendered just nine sacks so far this season. Through seven games last year, they had allowed 38.

Oklahoma State sophomore wide receiver Brennan Presley posted season highs last week against Iowa State with six receptions, 84 yards and two touchdowns. One included a spectacular catch in the end zone where he outjumped three Cyclone defenders to make the play. After recording four receptions for 40 yards and one score in the two previous games combined, it was a strong performance Oklahoma State needed. “Both of his touchdowns were fantastic catches,” Gundy said of Presley. “He’s a good football player. We’ve talked about trying to get him involved in the game more, and they did a good job of that.”