No. 18 SMU Mustangs got extra time before playing at Temple 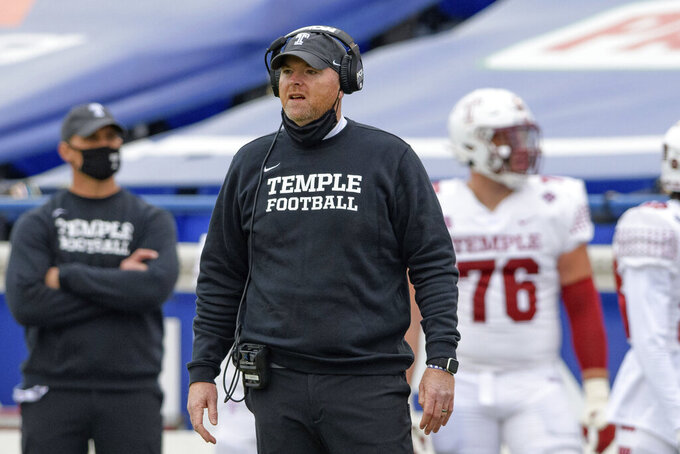 PHILADELPHIA (AP) — No. 18 SMU has a clear path to the American Athletic Conference title game after rebounding from its only loss — as long as the Mustangs keep winning.

The Mustangs (6-1, 3-1 American) are at struggling and undermanned Temple on Saturday, a game that was pushed back two days by the conference to allow for the best chance of it being played this week.

“I think it’s significant, honestly. It’s just hard, that’s a long travel for a midweek game,” SMU coach Sonny Dykes said. “Especially coming off of a physical game like Navy always is. It’s a good thing for us. We certainly would have played on Tuesday or Wednesday or Thursday, or whenever. We would have been ready to go. But I’m glad it’s on Saturday.”

After a 29-point home loss to undefeated and No. 6 Cincinnati, the Mustangs got back on track with a win over Navy last weekend. Their next games are at Tulsa and Houston — the only other AAC teams with fewer than two league losses — before ending the regular season at East Carolina.

Temple (1-3, 1-3) was missing nine players from its two-deep roster because of injuries and COVID-19 issues in a 38-3 loss at Tulane last week. That included quarterback Anthony Russo with a shoulder injury that will keep him out again this week, though the Owls could get back some of the other players.

“Could he be ready by Saturday? I think there's probably an outside opportunity for that physically,” Temple coach Ron Carey said. “But certainly he would not have practiced all week. He's obviously disappointed about it. My first job is to make sure the team we field out there is safe, and I don't think it would be a proper situation for him.”

The Owls are trying to avoid their first three-game losing streak in the same season since 2014.

Carey said the Owls are going with the same plan at quarterback as last week. Trad Beatty will start and fellow sophomore Re-al Mitchell, a dual-threat option, will also play.

“Hopefully, one of them gets hot and then I’ll stay with that person," Carey said. “That certainly was not the case on Saturday when neither one of them got hot.”

Beatty had never thrown a collegiate pass before going 11 of 18 for 122 yards with an interception against Tulane. Mitchell was 5-of-8 passing for 23 yards while running seven times for a team-high 37 yards.

“I am coming into this week having a little more experience,” Beatty said. “So I am trying to build off the film from last week and move forward.”

The last four times the Mustangs and Owls played, all since 2013, the winning team scored at least 45 points and both teams combined to score nearly 85 points. There were only two games in the series before that, and both were ties — 6-6 in 1942 and 7-7 in 1946.

The Mustangs led Navy 51-17 early in the fourth quarter and ended with a 51-37 win. There was also the home game against Memphis to open October, when SMU was up 24-3 early in the second quarter, then needed a field goal in the final seconds for a 30-27 win.

“We’re trying to get to the point where we can finish games better when we have big leads,” Dykes said. “It’s something that’s crept up a couple of times. We really played well early and then just didn’t play as well, particularly late in the game. We’re still learning how play with the lead.”

Gipson entered the Navy game in the fourth quarter with SMU up by 34 points. He fumbled on his third play, and Buechele was back in the game on the next series.