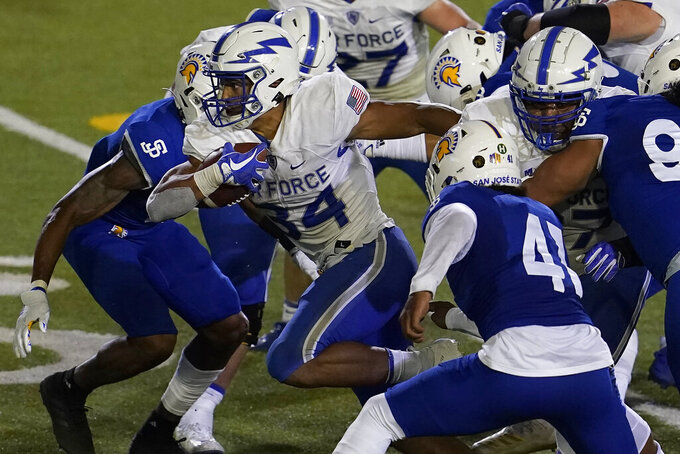 No. 25 Boise State moved into the rankings after a 42-13 win over Utah State last weekend. It's the 19th straight season in which the Broncos have appeared in the poll for at least a week. That's tied for the seventh-longest streak in the country. Air Force is 4-17 under coach Troy Calhoun against ranked teams. The Falcons last win over a ranked foe was at home in 2016 when they beat No. 20 Boise State 27-20.

Boise State QB Hank Bachmeier threw for 263 yards and three TDs in the win over the Aggies. He also ran for another. The challenge for the young Air Force defense will be applying pressure to Bachmeier. The Falcons are 23-4 over the last seven seasons when forcing two or more turnovers.

Air Force: Sophomore quarterback Haaziq Daniels threw the first TD pass of his Air Force career last weekend in a loss at San Jose State. He finished was 9 for 17 for 92 yards.

Boise State is 118-21 all-time when ranked. ... The Broncos are 140-17 in conference regular-season play since 2000. ... Sophomore running back George Holani rushed for 100 yards and a score on 14 carries against Utah State. Holani had 1,014 yards rushing last season. ... Air Force has gone 61-20 at Falcon Stadium under coach Troy Calhoun. The team was undefeated at home last season for just the sixth time. Four of those have been under Calhoun. ... Air Force has blocked 13 field goals, 18 extra points and 10 punts since 2007. ... The Falcons average 287.5 yards on the ground. Fullback Timothy Jackson leads the way with an 89-yard average.