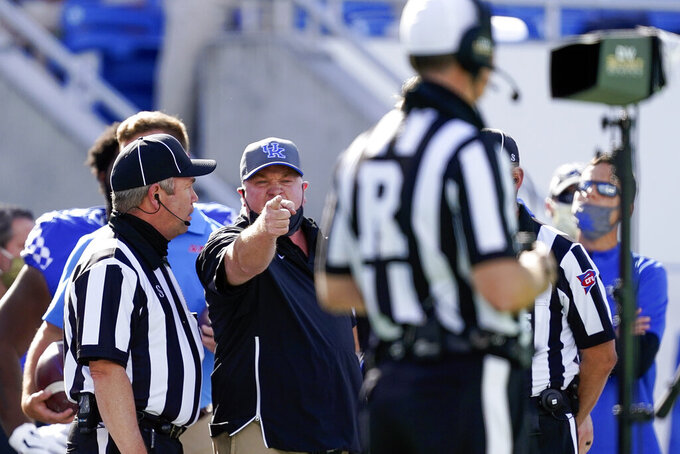 FILE - In this Saturday, Oct. 3, 2020, file photo, Kentucky head coach Mark Stoops points at an official during the first half of an NCAA college football game against Mississippi in Lexington, Ky. Sloppy play has been common over the first few weeks of the season, and much of it has been attributed to there having been little or no spring practice and disrupted summer workouts and preseason practices. As a result, game officials' preparation also was impacted. They typically hone their craft at game speed by working live scrimmages in the spring and preseason. There weren't nearly as many opportunities this year. (AP Photo/Bryan Woolston, file)

The TCU-Texas game needed three tries at the opening kickoff to get it right and the officials' misadventures continued right up to the final play.

Kentucky coach Mark Stoops was so incensed about the officiating in an overtime loss to Mississippi that he chased the crew as it left the field.

What appeared to be a missed defensive holding call on Iowa State's game-turning interception late in the Cyclones' upset of Oklahoma left Sooners fans screaming at their TVs.

“You can tell the season is real now because people are starting to talk about officiating,” national coordinator of officials Steve Shaw said. “That’s certainly not new, whether there’s a pandemic or not.”

Sloppy play has been common during the first few weeks of the season, much of it attributed to the lack of spring practice and disrupted preseason work. It also meant officials couldn't visit campuses and hone their craft in live scrimmages, though Shaw said training videos and presentations were well received and helped offset some of the lost opportunities.

Chemistry among the officials also has been an issue. Conference supervisors, to mitigate a risk point for possible coronavirus infections, have tried to assign officials to games within driving distance in an effort to reduce air travel.

The scheduling strategy has meant eight-person crews that generally stay intact an entire season, and often longer, have been broken up. Instead, officials work a game and then go their separate ways to work with another group the next week.

Instead of building camaraderie eating meals together and meeting in a hotel conference room to review mechanics, rules and video, officials are traveling alone and using videoconferencing to prepare for the next day's game.

John McDaid, a longtime referee before being named SEC coordinator of officials this year, said sacrificing continuity can have a negative effect. He also noted not all positions are interchangeable among football officials as they are in other sports.

“We’re all eight links and we all need to work together to be the strongest chain we can be,” McDaid said. ”For familiarity with each other, not just from a personal level but also in a professional level, how you work the position is pretty important. That’s why I believe staying together as a crew in football is a unique desire.”

In the Southeastern Conference, which has been playing for two weeks, McDaid was able to keep five of the seven crews for the Sept. 26 games mostly intact last week but an Associated Press review of Big 12 and Atlantic Coast Conference game reports showed a significant amount of shuffling of officials from week to week.

Dennis Hennigan, the ACC coordinator of officials, said keeping crews together is ideal, but many of the officials know each other from previous seasons.

“I have not observed any drop-off in their performance due to the pandemic,” Hennigan said.

The most scrutinized game was TCU-Texas in the Big 12 last week. Referee Brad Van Vark had worked only with his side judge and center judge in a previous game this season. Some of the other members of the crew had worked together at least once.

TCU was flagged for offside two straight times on the opening kickoff, the second one questionable. Flags were picked up after obvious holding and pass interference penalties on big plays.

The mismanagement of the game's final play — a safety that should have been nullified by a holding penalty — prompted the Big 12 to issue a statement saying officials messed up.

“That was probably the first really intense, extremely difficult game to officiate I’ve seen this year,” said Terry McAulay, a former NFL and college official who now is the NBC rules analyst. "I’d have to say they weren’t prepared. Not through any fault of their own or through Greg Burks' fault, but I think the situation kind of put them in that spot that they couldn’t really administer that game the way it needed to be.”

Burks, the Big 12 coordinator of officials, did not return messages left at the conference office.

“Will return to the traditional approach of keeping crews together and assigning as a collective unit,” Big 12 spokesman Bob Burda wrote in an email to the AP. “Assigning based on geographical proximity to host site will no longer be practical when the other CFO league begins its fall schedule.”

Shaw, the national coordinator, said the pandemic has created a fluid situation week to week. Some officials aren't working as much because of the regional scheduling as well as postponements and cancellations. Positive COVID-19 tests could require late assignment changes. Travel restrictions are always possible.

Conferences are requiring officials to take a self-administered COVID-19 test once a week. Officials must be notified of a negative result before they can travel to their game sites; Shaw said he did not have information on how many officials have had to quarantine because of a positive test but did say there have been a few.

There usually is an alternate official at each game that can take the place of an injured or sick official. Two games in the Big 12 and two in the ACC have had seven-person crews, one fewer than the standard, but it was unclear if COVID-19 was the reason.

Shaw said he had not expected a perfect season, but said the officiating has been “very solid” and it is not “falling apart at the seams.”

“You can take a couple games I won’t mention from this past weekend and say, ‘Boy, this didn’t work well,’" he said. "But we’ve had those games in years we didn’t have a pandemic, right? It’s still a game played by humans, officiated by humans, and there is going to be human error.”