Petersen says being a head coach can ‘become very heavy’ 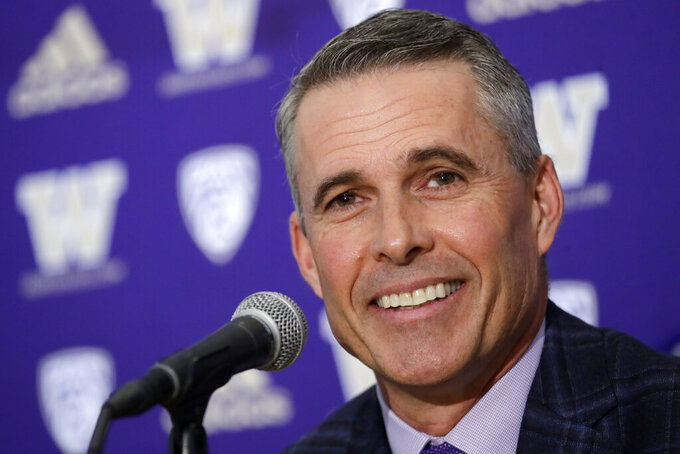 SEATTLE (AP) — With the evidence mounting in his mind that a break was necessary, Washington coach Chris Petersen decided just a couple of days before the Apple Cup that he was going to step away.

Outside of his wife, no one knew of Petersen’s decision that eventually led to his resignation and Jimmy Lake’s promotion to Huskies head coach.

But Petersen did have an anxious moment when he wondered if others knew. As he stood at midfield before kickoff Friday of what would be his final home game in charge, Petersen chatted with Washington State coach Mike Leach, who asked, “How much longer you going to do this?”

“Oh my God, this guy is a mind reader, too. I hope we have a good plan today because this guy is on us,” Petersen cracked, provoking laughter throughout the room.

Speaking with emotion rarely seen during a season, Petersen explained Tuesday why it was time for him to step away after six seasons at Washington, eight before that at Boise State and nearly 40 years involved with football overall.

Petersen teared up when talking about the commitment of his family to his coaching lifestyle and ultimately explained he no longer wanted his life to be dictated by the grind of being a college head coach.

“It becomes a lot of frustration and anxiety and stress. And some of the excitement and positivity and optimism can be pushed away, and that's never a way to lead your life," Petersen said.

Petersen doesn’t know entirely what is next for him. He didn’t rule out coaching again — “I’m not falling for that trick question,” — but sounded more interested in philanthropy and leadership.

Washington intends to keep Petersen involved with the athletic department in a leadership advisory role with the scope still to be determined.

“I’ve just got to figure out where all this energy and this passion and inspiration goes, and I don't want it to be on the football field,” Petersen said. “I'm excited to see what this whole thing takes, because I do have a lot of thoughts and ideas and passion for helping others. I've been through so many things in this business, so many things, that I think I can help other people in this business and maybe outside of it.”

Petersen said he came to realize his passion was waning after last year’s Rose Bowl. Petersen said he didn’t appreciate the grandeur and history of playing in the game and was too caught up in the stress of the matchup with Ohio State.

“You worked your whole life to get there. And I didn't really appreciate the week, I didn't appreciate the game like I need to as a kid growing up looking at that game,” he said. “And I think that was one of the things that really hit me loud and clear, and you start to pay attention to that.”

Petersen’s final game in charge at Washington will be the Huskies’ pending bowl. Petersen will go into the bowl game with a combined 146-38 record at Boise State and Washington, a .793 win percentage. He led Washington to a pair of Pac-12 titles and an appearance in the College Football Playoff semifinals during his six seasons in Seattle.

Despite his short stay, Petersen is revered at the school in a way typically reserved for someone with a much longer tenure.

“We knew we were getting a great football coach and we understood the success this man had and we had full confidence that he was going to build an incredible program, which he has done,” athletic director Jen Cohen said. “But what we didn’t know at the time is we were going to inherit this exceptional human being and we didn’t anticipate the impact he was going to have on our lives well beyond football.”

Petersen insisted he wouldn’t have been willing to step aside if Washington didn’t already have an obvious successor in Lake. Lake, who turns 43 in a couple of weeks, has been courted for other jobs around the country for several seasons thanks to his work as Washington’s secondary coach and defensive coordinator. It became clear he had a chance to become Petersen’s successor, but even he was shocked when he received the phone call Saturday while watching college football with his family that Petersen was stepping aside.

“Nobody knows how these things go. You just don’t know,” Petersen said. “But if it was ever stacked up, like, ‘OK, this guy needs a chance to roll,’ I’ve never seen one that is more prepared and ready that hasn’t been in the chair.”