PICK SIX: Freshmen with high expectations to watch in 2022 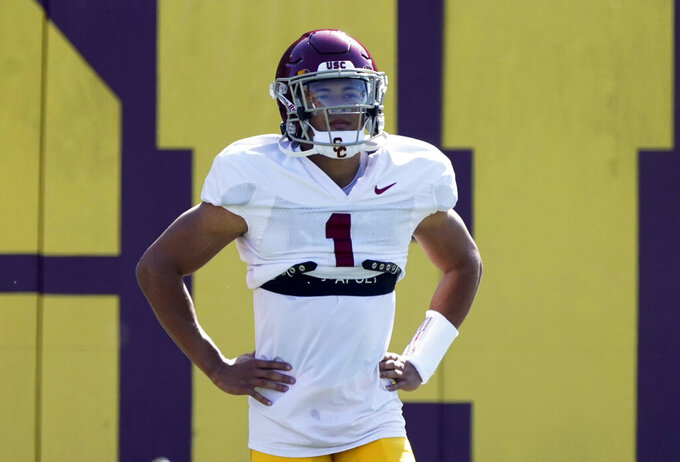 Travis Hunter was likely the most talked about recruit in the 2022 class, if not before signing day, certainly after he opted to play at Jackson State.

The two-way player from Suwanee, Georgia, became the first five-star recruit to sign with an FCS school since the ratings system was developed, and the first to sign with a program in the Historically Black College and University ranks.

Before he has played an official game, he's already turning heads. Hunter caught two touchdown passes, including an 80-yarder, and had two interceptions during the Tigers' spring game, suggesting he's ready to live up to the hype.

While Hunter aims to follow in the footsteps of Jackson State coach Deion Sanders, a pretty good two-way player in his day, he's far from the only blue-chip talent that will draw a lot of attention trying to live up to expectations.

Here are just some of the freshmen facing high expectations to watch in 2022:

Generally regarded as the nation's top recruit, Hunter's flashy debut, albeit against his own team, has some looking into the HBCU history books.

Among the alums are former Tigers running back and NFL Hall of Famer Walter Payton, Hall of Fame wide receiver Jerry Rice of Mississippi Valley State and Super Bowl-winning quarterback Doug Williams, who played at Grambling.

Hunter is not shying away from the expectations.

A five-star speedster and the Gatorade National Player of the Year for 2021 grew up a Penn State fan and could be the answer to a sluggish run game. It could help mightily that he enrolled early and took part in spring practice, too.

Becoming a more complete player is a big part of his challenge.

“He’s a very gifted runner,” offensive coordinator Mike Yurcich said. “I think we have a really good backfield and Nick is a special talent. But he has still got to progress in protections and just the fundamental tailback plays.”

At 6-foot-4 and 325 pounds, Nolen is one of three five-star defensive linemen to have signed with the Aggies, and was rated as high as the No. 2 prospect in the nation. Hailing from Powell, Tennessee, Nolen chose Texas A&M over four other Southeastern Conference schools, including the Vols, joining fellow linemen Shemar Stewart and Lebbeus Overton and five other five-stars in the class.

Despite suffering a season-ending knee injury in the first game of his senior season, Jackson figures to battle for playing time in the Trojan's secondary. A five-star player rated among the best cornerbacks in the 2022 class, coach Lincoln Riley said he has performed well in practice, but was held out of a scrimmage.

A Texas native rated among the top three quarterback prospects in 2022, Klubnik might not take the job away from DJ Uiagalelei right away, but any hint of struggle — Uiagalelei threw 10 interceptions and nine touchdown passes last season — could find the freshman warming up and ready to be thrown in the fire. At Westlake High School in Austin, he became the first quarterback to lead his team to back-to-back unbeaten seasons and state championships in Texas' highest classification since Kyler Murray.

Another of the Aggies' five-star recruits, Stewart stole the show in the spring game with seven catches, then impressed coach Jimbo Fisher in the summer.

“Every day in the offseason program he was out front leading everybody running and doing things, and he’s been very productive in all the practices and scrimmages,” Fisher said. Stewart was the offensive MVP of the spring.

By Steve Megargee 43 minutes ago
By Ralph D. Russo an hour ago
By Will Graves 2 hrs ago
By Anne M. Peterson 6 hrs ago
7 hrs ago