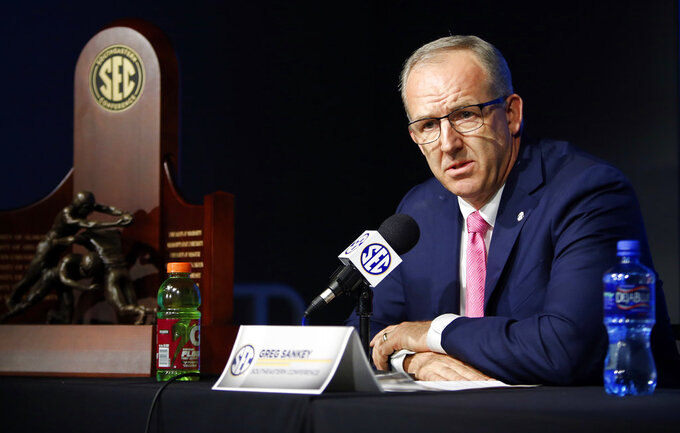 FILE - In this Dec. 1, 2017, file photo, Southeastern Conference (SEC) Commissioner Greg Sankey speaks with the media during an NCAA college football news conference for the SEC championship game at the Mercedes-Benz Stadium in Atlanta. Sankey says UCF should look "inward" to address strength of schedule issues that have held back the Knights in the College Football Playoff rankings. UCF athletic director Danny White says Knights can do nothing to fix an “inadequate postseason.” (Joshua L. Jones,/Athens Banner-Herald via AP, File) 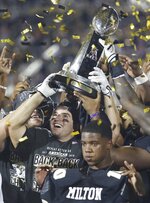 Central Florida was ranked eighth in the final playoff rankings by the selection committee on Sunday after finishing a second consecutive regular season undefeated. The top four teams make the playoff . The Knights, who have won 25 straight games and consecutive American Athletic Conference championships, were never given any serious consideration for the playoff. They will instead play LSU in the Fiesta Bowl a year after they declared themselves national champions following a Peach Bowl win over Auburn.

For the past two seasons, the committee has cited the Knights' schedule, which lags behind Power Five conference schools in degree of difficulty, as the reason they have been left out of the playoff conversation.

Sankey was asked about UCF and its place in the playoff picture during a radio interview at the Learfield Intercollegiate Athletics Forum on Thursday. The commissioner compared UCF's situation to when the SEC placed only three teams in the NCAA men's basketball tournament in 2016.

"We weren't living up to our expectations. Rather than point to the selection committee, other people ... we looked inward and said: 'How do we adjust to the circumstances around us?'" Sankey said. "I would observe that's the challenge for everybody at the FBS level."

"When it was us and when it was men's basketball, we knew we had two top-50 teams in 2015-16, which means you had virtually no top-50 wins in men's basketball. How are you going to access those wins? You have to improve your nonconference schedule," Sankey said.

UCF athletic director Danny White has been highly critical of the playoff selections and he objected to the comparison between college football's postseason and scheduling process and college basketball. Nonconference football games are typically scheduled years in advance. In basketball, schedules are often completed months before the season. White also noted 3 percent of FBS teams make the playoff while 19 percent of Division I teams make the men's NCAA Tournament field of 68.

"Basketball teams are rewarded for playing tough teams such as UCF through metrics like RPI or NET, while football teams avoid us because they're concerned about the 'eye test,'" White told AP in a text message.

NCAA statistics measure strength of schedule by simple winning percentage of opponents. UCF ranked 71st out of 130 FBS teams after the regular season (.530 winning percentage by opponents), well behind most of the playoff participants and contenders, though ahead of No. 6 Ohio State (82nd, .515).

Using the advanced metric S&P+, which ranks team using play-by-play data, UCF's schedule is the 83rd-toughest in FBS, but not that far behind most of the top six teams: Ohio State is 55th; Notre Dame 61st; Oklahoma 68th; and Clemson 76th.

"I don't think there are simple solutions necessarily," Sankey said. "There are solutions. One's going to have to evaluate their circumstances fully to make those decisions. My observation is there is a need to look inward. "

White, who said there is nothing UCF can do inwardly "to fix an inadequate postseason for college football," has called for an expanded playoff.

"We're at four though," Sankey said. "Everybody walked into this with their eyes open. Strength of schedule is a part of it. Resume is a part of it. It's not just about going undefeated in a season. That was never a criteria: if you go undefeated you're in the top four. But there are complexities to it and there are complexities that will be unique for every program."