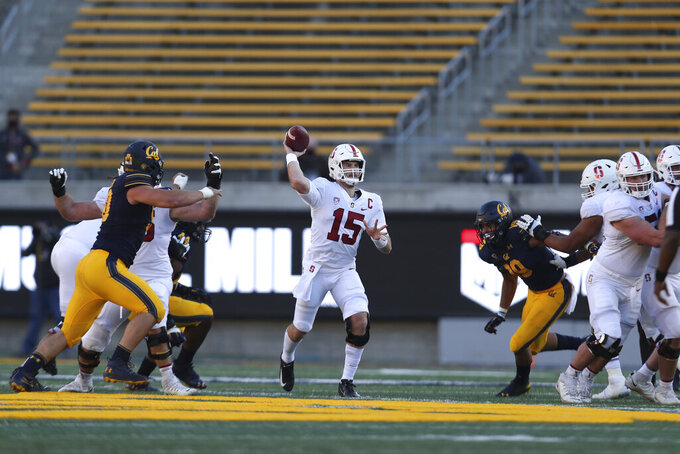 SEATTLE (AP) — When Stanford was in the initial stages of relocating from California to the Pacific Northwest for a couple of weeks, Washington was willing to help and give the Cardinal a place to get settled and practice for at least one night.

That’s likely to be the extent of the Huskies' hospitality toward the currently vagabond Cardinal.

Back in the AP Top 25 for the first time this season, No. 23 Washington has too much to play for Saturday when it faces Stanford to be concerned about being sympathetic toward the difficult situation facing the Cardinal.

Washington (3-0) has the inside track at the Pac-12 North title and a spot in the conference championship game after its comeback victory over Utah last week and Oregon’s loss to Oregon State.

Even in a truncated season filled with schedule changes and adjustments due to COVID-19 issues, being able to lay claim to a title would still be a meaningful accomplishment in Jimmy Lake’s first season as head coach.

Stanford (1-2) picked up its biggest win of the season last week, no matter what happens over the final few games. Its 24-23 win over California brought The Axe back to Stanford, but the celebration was short-lived.

Restriction imposed by health officials in Santa Clara County sent the Cardinal on a road trip that will last at least two games and potentially more depending on what happens the weekend of Dec. 19 and yet-to-be scheduled Pac-12 matchups. The Cardinal know they’re in Seattle through Saturday’s game and are spending next week in Oregon preparing to face Oregon State.

After that is a giant question.

“We’re just extremely grateful to continue our season,” Stanford QB Davis Mills said. “Really, we’ve been doing the same things we would if we were back home, preparing the same as usual, and we’re ready to go this weekend.”

The win over Utah was tied for the second-biggest comeback in school history for Washington and became a signature moment for Dylan Morris’ first season at quarterback. After two clean games, Morris made mistakes against the Utes, throwing three interceptions. But he was nearly perfect on Washington’s final drive, going 88 yards in the closing moments and capping the rally by throwing across his body and hitting Cade Otton on a 16-yard touchdown with 36 seconds remaining.

“It was no surprise to our team that he was able to do that under tremendous pressure,” Lake said.

The Cardinal are hoping to get a second straight standout performance from running back Austin Jones but will be challenged by a Washington defense giving up only 151 yards per game on the ground. Jones had 85 yards rushing and two touchdowns against California after running for 100 yards and two TDs in the opener against Oregon.

Jones’ only dud this season was his nine carries for nine yards in Stanford’s loss to Colorado.

Possibly no one in college football has been more disruptive on the defensive side than Washington outside linebacker Zion Tupuola-Fetui. In his first three starts, Tupuola-Fetui has seven sacks and three forced fumbles. He’s used a mix of power and speed to overwhelm offensive linemen from Oregon State, Arizona and Utah.

Tupuola-Fetui had three sacks against Utah and two each against Arizona and Oregon State.

“He’s on a hot streak right now, to say the least,” Lake said. “I don’t know if I’ve seen a three-game stretch with that stat line, with the forced fumbles, the sacks, the fumble recoveries, the tackles.”

The biggest play in Stanford’s win over California was a blocked extra point by Thomas Booker after the Golden Bears had scored to pull within 24-23 in the closing moments. It was one of two kicks blocked by Stanford in the victory, as the Cardinal also blocked a field goal attempt earlier in the game. It was the first time Stanford blocked two kicks in a game since 2013.

Even in the shortened season, Washington is ending up with the unexpected benefit of playing mostly at home. Saturday will be the Huskies' fourth straight home game, something they haven’t enjoyed since the 2014 season. Washington was supposed to play at rival Washington State last week before COVID-19 issues forced a cancellation and a rescheduled game at home with Utah.